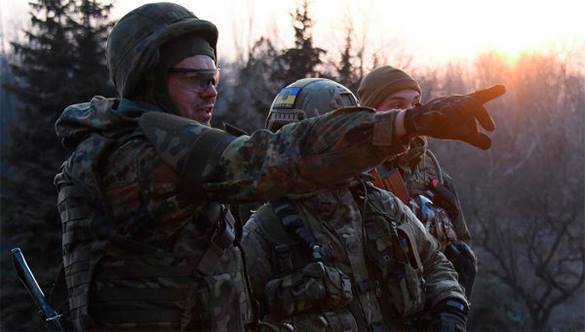 It is worthy of note that there are quite a few Russian public figures, who support the Nazi regime in Kiev. Such people usually position themselves as liberals and "defenders of freedom." One of them is Russian rock star Andrei Makarevich. According to those people, "there is no fascism in Ukraine". Yet, it just so happens that the Libertarians outspokenly stand up for pro-Nazi individuals.

As for Mr. Pashinin, he tried to prove to "dear Russian people" a year ago that it was freedom that won in Ukraine. According to him, there is no suppression of the Russian language and Russian-speakers in the post-Maidan Ukraine. Mr. Pashinin is certain that Russia has a long way to go to accomplish that.

But then there was the infamous Odessa massacre, the bombings of Donetsk and Luhansk, there were political assassinations of oppositionists and many other things that are in no way associated with democracy.

Noteworthy, Anatoly Pashinin appeared in the above-mentioned interview with the emblem of punitive battalion "Azov" on his chest.

The emblem of "Azov" is the Wolfsangel rune ("Wolf Hook»). The rune is a stylized swastika that used to be displayed on the banners of the 2nd SS Panzer Division "Das Reich". In fact, in Germany one can have very serious problems with the law for displaying this emblem in public.

Needless to say that Ukraine is not Germany. In Germany, they still, at least formally, have the de-Nazification legislation. The first commander of the "Azov" battalion, Andrei Biletsky, an ideologist of Ukrainian neo-Nazism, went to the Verkhovna Rada instead of a prison cell.

Back to actor Anatoly Pashinin. His choice of "Ukrainian friends" is not accidental - as ancient philosophers said, "like calls to like". The trip of the star of such well-known Russian films as "Admiral", "We are from the future" (38 films in total from 2001 to 2014) to the Ukrainian punitive troops speaks volumes. To crown it all, Pashinin positions himself as a Russian Nazi.

The actor, who played Russian and Soviet soldiers and officers in the above-mentioned films, said:  "There are no people among my friends who share the "Crimea is ours" point of view.  When something happens in Russia, they will take to the streets not just to stand there in the crowd - they will go to slaughter OMON (riot police)." According to the actor, they will do so to build the "true Russian power" which, for some reason, will not need Crimea. One shall assume that Pashinin's friends do not need the rest of Russia as well. All they want to do is to please Washington.

The fact of the existence of another Russian renegade, who supported the US-inspired Ukrainian Nazism is not original at all. Yet, this renegade sincerely considers himself a "Russian patriot," and openly declares the plans of his associates in Russia. This deserves close attention of not only security structures, but also of all people.