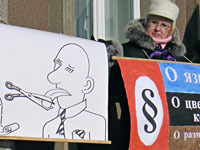 The Russian language in Estonia is the language of the invaders, and for 50 years the Russians allegedly had been "the dominant race" in Estonia. These statements were made by the Estonian President Toomas Hendrik Ilves.

Shortly before his visit to Switzerland, Ilves gave an interview to a local newspaper Der Bund. Much of it was devoted to the relations with Russia, the problems of the Russian-speaking population of the country and interpretation of history. The Estonian president once again said that the Russians, who constitute a quarter of the population, should not hope that their language would become official. He explained his point of view by of the notorious "Soviet occupation".

"For example, imagine that we occupy your country, but 50 years later we tell you that you have to make Estonian the official language. The occupiers seized the country, deported hundreds of thousands of people to Siberia and sent their people here. And now, when we finally found independence, should the language of the occupying power be the second official language of the country? Do not ask me funny questions," said Ilves.

In this regard it is worth mentioning that Sweden ruled over Finland related to Estonians for nearly seven centuries. Today Swedes account for six percent of the population, but their language has an official status. The share of Russians in Estonia is many times greater. Needless to say that the deportation of 1941 and 1949 was conducted not on the national basis but according to the social class. Not only Estonians but also Russians were deported.

In addition, the European Charter for Regional Languages that Estonia has signed says that if in a particular locality 20 percent of the population speaks the minority language, then this language should be used in official institutions. In the north-east of Estonia Russians account for the vast majority of the population, and in Tallinn there are more than 20 percent of them. Yet, the Russian language has no status in these regions.

In addition, the President decided to practice his math skills. He cited statistics allegedly showing that of 25 percent of Russian speakers in Estonia eight do not have Estonian citizenship. This means that "only" 17 percent of the Estonian population is Russians with full citizenship. This number is even lower if we consider only the citizens. However, Ilves did not say anything about the fact that the institute of "aliens" does not exist anywhere except for Estonia and Latvia, and that it contradicts all norms of the EU.

Further, the Estonian President made a "historic discovery". It turns out that Russians had been the dominant oppressors of the poor Estonians. "They (Russians) had been the highest in the race for 50 years. They had long been a nation of masters and had various privileges. Now, since they have no more privileges, some people see this as a loss," Ilves said.

Perhaps Ilves confused the Soviet laws and policies of the Nazi. It was the Estonian SS who willingly believed the Russians to be "subhuman." In the last years of the pre-war independent Estonia the nationalism blossomed in the country. If, however, we delve further into history, we see that the landowners in Estonia were Germans, not Russians. Incidentally, serfdom was abolished in Estonia nearly 60 years earlier than in the Russian provinces.

What privileges did the Russians enjoy in Estonia? The country's leaders have always been exclusively Estonians, and the Estonian language had an official status. The presence of Russian schools where all subjects (as opposed to 40 percent today) were taught in Russian could be considered a "privilege". Who was it if not the "occupiers" that built many enterprises and roads in Estonia? There is no single document in the Russian Empire or Soviet Union mentioning that the Russians are above the Estonians.

When the Estonian President was reminded that there is still no border treaty between Russia and Estonia, he complained about the "slowness" of the Russians. "The border is defined, but the Russians are not signing the border agreement. Never mind! The Russian-Norwegian agreement was signed last year, and the Russian-Japanese peace treaty has not been there since 1945. So it takes time," Ilves stated.

In 2005 the border treaty was signed by the two foreign ministers, Sergei Lavrov and Urmas Paet. However, the Parliament of Estonia when ratifying made a reference to the Tartu treaty of 1920. In fact, it was a covert territorial claim. Indeed, according to the document, the Pechora district of the Pskov region and part of Kingisepp district of Leningrad region were transferred to Estonia. However, their population has never been ethnically Estonian.

Naturally, after such a "historical reference" Russia has suspended the ratification of the document. What kind of a border agreement is it if one of the contracting parties makes claims for another one? In contrast to Estonia, Latvia has removed its claims to Pytalovo district of the Pskov region, and the treaty has entered into force.

The Estonian leader also complained that Russia allegedly threatens its neighbors with a war. He wrongly interpreted the words of Dmitry Medvedev that if Russia had not intervened in the war in South Ossetia, NATO would have crossed its southern borders. "Last month, the Russian President said twice:" We intervened in Georgia to prevent the expansion of NATO ... Civilized countries do not threaten others with a war," Ilves said. Not mentioning that the war was actually waged by his ally, Mikhail Saakashvili.

When the Estonian President was asked another question related to Russia, he could not hide his irritation. "I do not understand your obsession with Russia. This is a fairly insignificant part of our lives. The trade with Russia is only eight percent of our foreign trade, while the trade with the EU countries accounts for 75 percent," Ilves stressed.

Again, Ilves's words are highly questionable. Throughout 20 years of the independence, a significant portion of revenues to the Estonian treasury was coming from the transit of Russian oil, nonferrous metals and roundwood delivered through Novotallinsky port. At some point, poor in natural resources Estonia has even become one of the largest exporters of nonferrous metals. This is the "small value" of Russia for this Baltic country.

President Ilves keeps surprising us with his wild imagination. It would seem that he said everything about the invaders and about the need to struggle with the Russian language, and about the "terrible Russia." Yet, his statement about the Russians as the masters of the nation is really a historical "discovery."

However, this kind of propaganda speech should be given a harsh response by the Russian official structures. Otherwise, Estonia and others will continue to pour flows of historic mud on Russia with impunity while the great Russia that has an answer looks like a dog that made a mess.