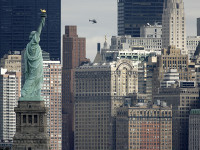 Western media go on rampage in their anti-Russian campaign that uses the terminology of the Cold War, Russian Foreign Minister Sergei Lavrov wrote in his article. An expert from the U.S. agrees with him, urging Obama to reach a new level of partnership with Russia. Media wars against Russia look cartoonish.

The head of the Russian Minister Sergei Lavrov published an article in the Kommersant newspaper titled "In the understanding of the EU and the U.S., the choice for Ukrainians has already been made." In the article, he tried to understand the causes of incessant attempts to draw a red line between Russia and the West. Lavrov blames the Western media for this.

"It seems that our Western partners often act reflexively, guided by the  straightforward principle of "friend or foe," not thinking much about long-term consequences of their moves. One cannot but agree with the fact that it is common values that serve as the cementitious composition in the construction of a common European home. However, one should agree what kind of values they are and who defines them . We presume that value orientations should be a product of mutual consent, rather than an invention of any state or a group of countries," Lavrov wrote.

Analyzing methods of media warfare on the Ukrainian front, Lavrov concludes that the West is engaged in "social engineering" , which "always gives rather poor results."

"Just look at the effects of external interference in Iraq, Afghanistan and Libya. The last example is connected with the situation in Southern Sudan - the state that was created largely thanks to the persistence of a number of influential international players. Lavrov believes that one should strive for a fundamentally new, higher level of partnership that can be achieved only on the basis of equality, mutual respect and mutual interests.

Deputy Director of the Institute of USA and Canada, Victor Kremeniuk, disagrees with the minister.

"I do not agree with this point of view that the West has such a bad attitude to Russia. Nobody underestimates Russia. As soon as Russia learns to behave decently, others will communicate with the country decently too. When the country is not being nice, then it gets an adequate attitude in return. The two parties are on an equal footing, hence all the problems," the expert told Pravda.Ru commenting on the statements from Sergei Lavrov.

However, American journalist Stephen F. Cohen fully shares the view of the Russian minister. On the website of The Nation, he published the article titled "Distorting Russia.  How the American media misrepresent Putin, Sochi and Ukraine."

According to Stephen Cohen, "American media on Russia today are less objective, less balanced, more conformist and scarcely less ideological than when they covered Soviet Russia during the Cold War." "Even in the venerable New York Times and Washington Post, news reports, editorials and commentaries no longer adhere rigorously to traditional journalistic standards, often failing to provide essential facts and context," Cohen wrote.

Steven Cohen says that Boris Yeltsin was a perfect Russian leader for American journalists, as he was going on the American way of democratization. When Vladimir Putin appeared, who took the course of the policy of national interests, Western media began to demonize him tirelessly. Cohen cites typical clichés of U.S. media:

"The media therefore eagerly await Putin's downfall-due to his "failing economy" (some of its indicators are better than US ones), the valor of street protesters and other right-minded oppositionists (whose policies are rarely examined), the defection of his electorate (his approval ratings remain around 65 percent) or some welcomed "cataclysm."

The conclusion is always the same - the collapse of Putin's Russia is inevitable.

"I do not think it's malice. This is a tough question. There is a tradition in the West that was developed during the 19th century, Victor Kremeniuk told Pravda.Ru. - In the West, Russia is seen as an unfree country where human rights are violated regularly. From this point of view, little has changed in Russia since then. Secondly, since the Soviet era, the process of making political decisions has been a closed one. Russia presents itself as Europe, but in fact it is not Europe. Of course, what they write is often nonsense, but the eyes of a foreigner notice right. Unfortunately, my colleagues and me believe that nothing has changed since the Cold War indeed. Our Asian manner to conceal - just look at so many restrictive laws that the Duma takes all the time - comes back to us. I would not make a tragedy here. We learn to live in an open world, and the world gets accustomed to the fact that there is such a huge country as Russia. The country is somewhat different, and there is a process of mutual cognition that we can see," the expert said.

We can argue with Kremeniuk here. Russia does not represent itself as Europe. Quite on the contrary, Russia strongly emphasizes its special civilizational and political course that has a lot of supporters in the world. Let's take at least the  recognition of Russia in the Middle East and in Latin America, Africa, the choice of Sochi as the venue for the Olympics - everything shows the growing trust to Russia on the part of the world community.

The article by Lavrov is an attempt to convince the West to reconsider its attitude to Russia, to finally recognize the country as an equal partner. There are things that should not be done at this point. In particular, it is unacceptable to deprive Russia of the last buffer state in light of NATO's expansion to the east, Stratfor wrote.

"Moscow may feel being cornered, and it will have no other alternative but to create a military-political alliance with China. This is not exactly the country which Russia would like to seek an alliance with, perhaps this is not a current trend, but Russia may come to the point when it has no other choice," Vladimir Zharihin, the director of the Institute of CIS told Christian Science Monitor.