Some European politicians are no longer satisfied with the results of World War II. "For me and my family, the results of the Second World War were highly negative," said the President of Latvia Andris Berzins. Ukrainian Prime Minister Yatsenyuk accused Russia of aggression against Germany and Ukraine during WWII. 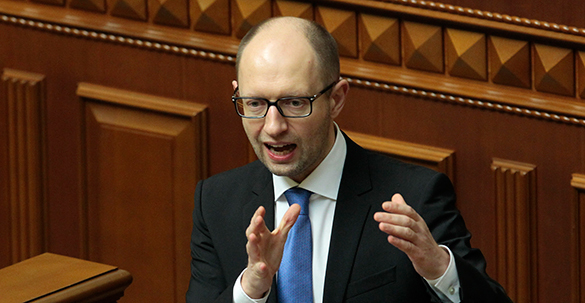 "Russia's aggression in Ukraine is an attack on the world order and the order in Europe. We all remember the invasion of the USSR in Germany and Ukraine. We must not allow this. No one has the right to rewrite the results of the Second World War. However, this is what Russian President Vladimir Putin is trying to do," said Yatsenyuk in an interview to German TV channel ARD.

Ukrainian Prime Minister Yatsenyuk denies his affiliation to the Church of Scientology. However, when he lived in California, he had meetings there in 2009  with highly elusive head of the sect, David Miscavige, voltairenet.org website said. "It is quite possible that Yatsenyuk joined the organization during his transition to Scientology-controlled Banque Aval in 2006 and became one of the top leaders of the sect with the level of OT-6 (Opératif Thetan Niveau 6).

Many experts see the Church of Scientology as a sect. It was founded in 1952 by American science fiction writer L. Ron Hubbard. The sect has very ambitious objectives, namely, global domination. For most pseudo-religions, the prime goal is to increase the number of followers. For Scientologists, it is the quality, but not the quantity that matters. Scientologists position themselves as the church of elites - political, financial, intellectual.

Millionaire Andrej Kiska has recently become the head of Slovakia. Kiska is also a Scientologist, according to Voltaire. Andrej Kiska, like Yatsenyuk, denies that, but says that president "should be an active counterweight to government." "Nothing will stop me from taking efforts to transform Slovakia," Kiska said. This is an interesting detail, taking into consideration the fact that Prime Minister Robert Fico has a reputation of a pro-Russian politician in Europe.

The Church of Scientology is linked to the CIA

According to many US-based experts, the Church of Scientology is linked to the CIA. For example, its former senior adept, Jon Atack, penned a book titled "Scientology: Hubbard Intelligence Agency." In the book, he notes that the CIA, on the basis of the "church," trains "psychic spies," who conduct "psy-wars" to brainwash people on a subconscious level. They also make weapons that directly affect the central nervous system and brain activity of human being. This form of psychic activity is known as "remote viewing," the author notes. Psychic spies say that they guided the bombing of Libya and identified targets for missiles during the Gulf War.

Scientologists do not stop at common forms of espionage. In Canada, for example, in 1992, three members of the sect were convicted on charges of stealing documents from the police and public institutions of Ontario. According to Jon Atack, the participation of the CIA in the project explains the inability of governments around the world to protect their citizens from Scientology. This could be true, given the fact that Scientologists already chair governments.

Why did Scieftologist Yatsenyuk cast doubts on the results of World War II while on a visit to Germany? After all, Germany has been on the road of denazification. Reputedly, Germany is a staunch anti-war stronghold in Europe. Why didn't German officials react to Yatsenyuk's infamous remarks? Why didn't Frau Merkel say anything on the subject either? Can the German Chancellor see that the power in Ukraine belongs to Nazis? Maybe Yatsenyuk and Berzins attempted to conduct a "psychic attack" to awaken the Aryan identity of Germany? In any case, it is obvious that Yatsenyuk said those words to see how others would react. As we can see, the test was a success. Berlin hushed the scandal up despite an official inquiry from the Russian Foreign Ministry and allocated $1.5 billion for the "economic recovery" of Ukraine.

All in all, Angela Merkel has been "silent" for a long time already. Merkel was sponsoring Klitschko's Maidan party through Adenauer Foundation before. Today, she is an ardent supporter of sanctions against Russia. It brings up an idea that the Americans will orchestrate World War III through Germany, as it was the case in 1914 and 1945? The assumption can be true just because Germany still lives under  the rules of the US occupation. The UN Charter says that WWII victor states can always reinstate Germany's status of an "enemy state," should the latter conduct "aggressive" policy. In this case, victor states can take Germany under their auspices again, the UN Charter says. Noteworthy, the United States has more than 40,000 troops in Germany.

There is a coalition being created to have Germany involved in direct confrontation against Russia. As usual, the coalition consists of the Baltic states and Poland. Noteworthy, Berzins has joined the leaders of Estonia and Lithuania, who have refused from the invitation to visit the Russian Victory Day parade in honor of the 70th anniversary of Victory over Nazi Germany.

"The US is apparently trying to go on an anti-Russian crusade, in which they are trying to get Germany involved, - Polish lawyer, political scientist and journalist Stanislav Mikhalkevich wrote. "It is worth thinking what might convince Germany into pulling the plug on the strategic partnership with Russia. It seems to me that only one thing can do it - permission from the United States to deviate from the provisions of the conference of Four Powers in Potsdam in relation to the territories that are known as the "lost lands" in Germany. For the price of the "lost lands," Germany may abandon strategic partnership with Russia," Mikhalkevich believes.

This is a purpose for the revival of German national chauvinism. Yatsenyuk and the Balts are already in, but one should put more pressure on Poland, because the latter owns many German territories that it obtained after WWII. According to Mikhalkevich, "it is in the interests of Germany to establish Judeopolonii (Jewish Poland) on the Polish territory. In this direction, the US continues putting pressure on Poland in the implementation of so-called Jewish property claims that can be satisfied through the sale of state-owned forests.