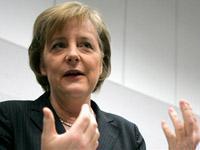 German Chancellor Angela Merkel during her visit to Belgrade has put forward the main condition for Serbia's accession to the EU - a de facto recognition of independent Kosovo by the Serbian authorities and establishment of a dialogue with it. The speech of the German government sounded like an ultimatum. It seems that Germany is engaged in the reconstruction of the Balkans according to its own image whose cornerstone is the maximum weakening of Serbia.

Until recently, the Serbian President Boris Tadic has been thinking that his country was closer to the EU membership. Indeed, in recent months The Hague tribunal had been given ex-Bosnian Serb army commander Ratko Mladic and former leader of the Serbian Krajina in Croatia Goran Hadzic. Their issue seems to be regarded as the main condition for starting negotiations with the EU. However, Merkel made it clear that Serbia must do "something else" that outweighs giving politicians and military leaders to The Hague.

"The official Berlin sees the future of Serbia in the EU. But positive results should be achieved as soon as possible, including through direct talks between Belgrade and Pristina on the normalization of bilateral relations. In addition, the Federal Republic of Germany is against any unilateral action aimed at resolving the Kosovo conflict. This is a prerequisite for accession to the EU, said Merkel at a joint press conference with Tadic.

The German chancellor stressed the need to strive for progress. She added there was no quick solution to these issues, but the work needs to be done. Then she sketched out a plan for the Serbs. She said that parallel administrative structures of Kosovo must be addressed, and trade development should be facilitated. Translated from the language of diplomacy, this means the following: northern Kosovo areas still obeying Belgrade must recognize the Albanians, and Serbia must accept this. The Serbs must also stop the economic blockade on the area.

Germany's demands are not limited to Kosovo alone. To be able to join the EU, Serbia, according to Merkel, is obliged to reform the administrative and legal system and provide legal protection to national minorities. If we were to read between the lines, it would mean that today approximately 400 thousand Hungarians reside in the Serbian Vojvodina, in Sandzak - over 200 thousand Muslim Slavs, in the Presevo Valley - up to 60 thousand Albanians. The interests of these groups do not have to suffer similar to the interest of the Kosovo Albanians that Slobodan Milosevic tried to" infringe ".

Merkel's talks in Belgrade involved the economic component as well. In particular, she demanded that the Serbian authorities empower the market economy. What the empowerment of the market economy on the basis of EU rules means is obvious from the example of the former socialist countries that have already entered the European Union. This means opening up the markets and allowing the foreigners to access the tastiest morsels. As a result, industrial enterprises and banks found themselves under the control of German companies.

To somehow mitigate the effect of the ultimatum, Merkel praised the Serbian authorities for their perseverance in terms of bringing the country to the European standards. On his part, President Tadic, swallowing most of the German demands, called Germany "a key partner of Serbia in the EU." After that, he (as much as the situation permitted) tried to argue with the guest from Berlin on Kosovo and outlined his vision of the situation.

The Serbian president stated that today his country was facing very difficult problems in the region, and one of them was Kosovo and Metohija. He added that the country does not need to be pushed for a dialogue with Kosovo as they are interested in solving this problem and have no illusions about the fact that Serbia will be able to enter the EU with this conflict unresolved. Europe has enough of its own conflicts and problems, and Serbia intends to first resolve conflicts in the Western Balkans.

According to Tadic, Serbia is not going to recognize Kosovo's separation. He urged his country not to make a choice between the EU and that area. The politics "either the EU or Kosovo" is wrong and ultimatum-like, which is contrary to the European values ​​and should be avoided. He stressed the need to find a flexible, creative solution that will not affect the normal lives and will not impinge on the dignity of either the Albanian or the Serbian people, and will not create a threat to neighboring countries.

In conclusion, the Serbian president expressed hopes that the European Union (including Germany) will assess Serbia under the same criteria as other candidates for membership in the organization.

The comments of the Serbian leader are hard to disagree with. However, the tone of the German Chancellor left no doubt that Serbia will not be assessed according to the same criteria as other candidates for the EU membership. Strictly speaking, the Serbian authorities have been negotiating with Kosovo Albanian leaders for many years with no result. In order to get the results, Frau Merkel arrived in Belgrade with an "inspection". She is only putting pressure on one side - the Serbs. There can be only one result: the recognition of Kosovo by Belgrade.

It has to be said that it would not be just recognition of Kosovo, but its recognition within the borders of the autonomous province within Serbia and Yugoslavia. Recently, during a visit to Pristina, German Foreign Minister Guido Westerwelle made it clear that the revision of the boundaries of the area may not be on the agenda. Consequently, the Serbs still living in the north of Kosovo, as well as official Belgrade, should recognize the new realities because Germany said so.

In the recent incident when the Albanian authorities of Kosovo made an attempt to take control over a checkpoint on the border with Serbia, Germany virtually took the side of the Kosovars. The Germans ignored the fact that their actions have provoked a fresh outbreak of violence. At the same time they were outraged by the fact that the Serbs on both sides of the border, artificially created by NATO bombings in 1999, did not want to be completely separated from each other. They demanded that Belgrade "takes action" against the Serbs.

This stance of Germany is not surprising. Back in the 19th century Germany believed the Balkans to be a zone of its strategic interests, and the main enemy in the way of their implementation was Serbia with a shadow of Russia behind it. During the Second World War, Hitler engaged in the maximum fragmentation of Serbia, transfer of parts of its territory to Hungary and Bulgaria, the actual separation of Kosovo, and the creation of anti-Serb Independent State of Croatia (NDH).

In the early 1990s, chancellor-unifier Helmut Kohl did everything to force the breakup of Yugoslavia. The coalition of the conservative CDU / CSU and liberal "Free Democrats," in power until 1998, was the first one to recognize Slovenia, Croatia and Bosnia-Herzegovina and push those decisions in the EU and the UN, virtually inciting a war. In 1995, Foreign Minister Klaus Kinkel of Germany welcomed the massacre of Serbian Krajina by Croatian authorities. Bundeswehr aircraft bombed Bosnian Serb positions.

Kohl continued the course to punish Serbia in the case of Kosovo. He called on punishing Belgrade back in 1998, a year before the NATO bombing. The bombing (again with the Bundeswehr) occurred at the time when a coalition of Social Democrats and the "Green" were in power in Berlin, but the process was started earlier. The German left are hard to consider pro-Serbian, but their anti-Serb attitude was not as radical as that of the right. Today the coalition of Christian and Free Democrats is in power again, with all ensuing consequences.

Germany is talking tough with Serbia, trying to achieve its goals. It will be extremely difficult for the Serbs to resist the pressure. Half a million Serbs are making their living in Germany, in which case they will be deprived of sources of income. The economy of Serbia is devastated by bombing, and the dependence on Germany is already huge. Serbia is now almost on its knees, and Germany aims to consolidate this state of affairs and finish the separation of Serbia to become the main and decisive force in the Balkans.