Some experts believe that World War III will start 100 years after the first one and will take lives of hundreds of millions of people. Some scientists think that the war is already going on, nareing the completion of its first stage. 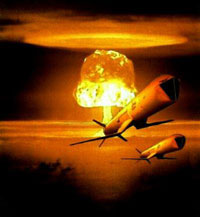 Konstantin Sivkov, first VP of the Academy for Geopolitical Issues, developed a scientific concept of the reasons, stages and timeframes of World War II. He shared his forecast with Svobodnaya Pressa.

Sivkov believes that planet Earth has experienced a global, civilized crisis. The crisis was caused by several disproportions, namely: 1) conflicts between growth of production/consumption and available resources 2) conflicts between “poor” developing countries and “rich” industrially developed countries, between nations and transnational elite; 3) conflicts between spiritless free market with the power of money and spiritual roots of various civilizations, including Orthodox, Muslim, Buddhist and others.

“The analysis of possible solutions of these misbalances and conflicts shows that they are of antagonistic nature, and the crisis cannot be solved without significant infringement of interests of some large geopolitical subjects. This means that participation of military forces is unavoidable. Considering the global nature of the crisis, we may assume that military participation will be global as well, “Sivkov believes.

He predicts that World War III will be of coalitional nature. Countries will form coalitions based on their loyalty to one of the two models of world order.

The first model is “the world of civilized hierarchy.” Select few brutally exploit the rest of humanity. The second model is “civilized mutual support” or “civilized harmony.”

“In other words, the war will be waged to define the spiritual basis of new world order. It will either be based on individualism, selfishness and suppression, or community, domination of mutual interest to survive and develop and support each other. This is the main difference between the war to come and previous wars that were fought for economic redistribution.”

Two coalitions already exist. The first one is the alliance of the so-called industrially developed countries represented by Western civilizations. Spiritual foundations of this coalition are based on individualism and material possessions generating power of money. The coalition’s military and political core is represented by the block NATO. The second coalition involves countries of orthodox, Islamic and other civilizations based on the domination of spiritual over material. This coalition is interested in multipolar world order. Yet, these countries have not realized that they have mutual geopolitical interests, let alone a necessity in a political or military unity.

“The countries that are not a part of Western civilization are not ready for military confrontation neither in terms of organization nor technical preparedness. On the other hand, this coalition has overwhelming majority of people and control over ample natural resources and territories. This greatly increases their chances to win a long war and provides favorable circumstances for fighting the aggressor during the initial stagesofwar. Another potential advantage is that simultaneous attacks in all directions are practically impossible. This creates a reserve of time for consolidation of countries into an anti-imperialistic coalition. There is a possibility of supporting the countries that will become the first victims of aggressors,” Sivkov says.

The scientist is convinced that the war is already going on. So far it is in a relatively peaceful stage.

“The first stage that we may call an “attempt of peaceful crisis resolution” is nearing its completion. 20G summits fighting in the battle field right now are obviously not bringing the results. Imedi and Helsingin Sanomat provocations mark the beginning of stage two, that we may call a “threat period before the beginning of world war.” During this stage Western civilization has commenced preparation for local wars and armed conflicts for resources.

The main actions at this stage are information operations and actions in economic area that may take various forms, from economic sanctions to terrorist attacks against industrial facilities, as well as different activities of Special Forces,” says Sivkov.

“In a few years, the third stage will commence, the stage of “limited wars,” that will later turn into a full scale world war with all types of weapons.

The only restricting factor at the moment is Russia ’ s nuclear potential . According to the forecast of the scientist, the West will try to take away Russia’s nuclear shield.

“Considering the situation in Russia, when the fifth column of the West significantly affects decisions in Russia’s defense sector, in particular, the direction Russia’s armed forces will take, we can expect the form of SNF contract that will deprive Russia of its nuclear shield. Of course, it will be presented with a beautiful wrapping of struggle for the world without nuclear weapons.

Russia may expect physical elimination of its nuclear potential during first stages of the world war (organized terrorist attacks, etc.) with further transition of neo-imperialistic coalition to unlimited use of nuclear weapons, which will bring it victory in the war,” Sivkov stated.

He believes that aggressors will not be stopped with a possibility of death of hundreds of millions of people.

“History shows that the elite of “selfish” civilization do not get stopped by human sacrifices if there is a guarantee they themselves will survive in bunkers. The analysis shows that if the new world war is waged, it will touch the majority of the world population, all continents, oceans and seas. Over 100 million people may participate in this war. Total demographic losses may exceed several hundred millions of people. Therefore, all honest people on Earth, including those who form the “selfish” coalition must do everything they can not to allow it to happen. To do this, we have to mitigate with the force of law or other methods, the greed of transnational and national

tycoons of the financial sector. We have to stop their ambitious, greedy, shameless and sometimes stupid politicians. This can only be done based on international consolidation efforts,” the expert summarized.