Man's family destroyed in Finland because his wife is Russian 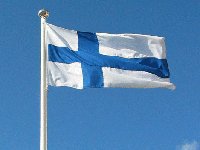 A Finnish citizen does not know anything about the whereabouts of his eldest daughter for 13 years. Moreover, for five years he remains unaware of the whereabouts of his Russian wife and their youngest daughter. The children were withdrawn from the family by child protection services, and the eldest child - right from the hospital. His wife was sent to a mental hospital. Meanwhile, Finland is very interested in attracting Russian tourists. The country is willing to abolish visas with Russia.

The Finnish human rights defender Johan Backman received a call for help from Finnish citizen Kauko Oranen. The man shared his dramatic story of how the Finnish custody service destroyed his family. Oranen has been trying to find his eldest daughter for 13 years already. Five years ago, the man lost his five-year-old daughter and then his wife.

At the end of the 1990s, Kauko Oranen met a young woman from Russia, Oksana Loginova. In September 1999, Oksana gave birth to their daughter Natasha. Social workers took the baby girl away from the mother right at maternity hospital. Oksana and Kauko were not married at the time, when the woman gave birth, and authorities claimed that they were intended to deport the woman. Officials did not even let the father take his own daughter.

Nevertheless, Oksana and Kauko got married. In 2001, they had another daughter. Still frightened with the previous withdrawal of their baby, the woman asked her husband to take them back home quickly. The little girl was living in the family for five years. However, child protection services took the girl away from the family yet again. According to Johan Backman, the documents said that the father had a negative attitude to child protection officers, and did not want to cooperate with them. The mother, who was totally crushed by the fact that she was going to lose her second child, was sent to a psychiatric hospital.

"In Finland, it's very easy to put a person to a hospital for compulsory treatment. This method is often used in relation to Russian women, who can not deal with the fact that they are being separated from their own children. They can be placed to a psychiatric hospital for a short time - a week, or a month, to calm them down so to speak. Afterwards, the fact of the woman's stay at such a hospital will always be used against her at court," says Johan Backman.

Russian woman Valentina Putkonen was sent to a psychiatric hospital last year as a result of a neighbor's complaint. Four people broke into her apartment - a doctor, a nurse and two police officers, who handcuffed the woman. There was no real reason given for such an attitude. The woman has been fighting for her three children for several years: the children were taken away from her by social services as well. The reason for such a move was as follows. The woman allegedly slapped her son and did not allow her daughter to eat dessert before dinner.

"Ten years ago, Valentina Putkonen was forcibly placed in a psychiatric hospital for a short period of time. Now they resort to this fact not to give the children back to her," says Johan Backman.

Having lost his two children and wife, Kauko Oranen was not going to give up. He shared his story with Finnish media, but he was eventually isolated from his children completely. He has not been able to see his daughters for years already, although he has not been deprived of parental rights. His attempts to find out where his wife and children stay have yielded no results. The authorities do not provide any information to him supposedly on the base of his aggressive behavior.

"As soon as a person starts talking about the violation of their rights and seek justice, they are immediately declared dangerous and almost crazy in Finland," explains Johan Backman. Kauko Oranen would constantly write letters to various agencies seeking investigation into his situation. When bureaucrats had enough, they obtained a judgment forbidding the man from writing to certain officials. The most absurd aspect about the story is the fact that Kauko does not even know who he is forbidden to write to: he was not informed on that. Should the man go to this or that government agency, he may be punished for that.

Oranen has managed to find out that his daughters had been to six different children's homes and foster families during these years. He does not know where the children are now. The information about that is "strictly confidential," officials say. "My family has been destroyed," says Kauko Oranen.

A few days ago, Johann Backman had a call from another Russian woman with a similar story. Seven years ago, the woman had her baby girl taken away from her, when she was still at maternity hospital. Today, the mother is allowed to visit her baby for two hours once a month. The woman is afraid of publicity, because losing these two hours a month would be a tragedy for her.

Human rights defenders know the stories of 50 children who have been withdrawn from Russian citizens in Finland. It appears very strange against such a background that the Finnish authorities plan to abolish the visa regime with Russia. The Finnish president called it "one of the most important projects in the Russian-Finnish relations." While acknowledging that the final decision will be made in Brussels, the Finnish president stressed out that his country was very interested in this. This is understandable: Russian tourists bring about 40 percent of profit to the Finnish tourist industry.

However, when it comes to the question to create a joint Russian-Finnish commission that would deal with the controversy over the custody of children in mixed marriages, the Finnish authorities are strongly opposed to that.

As long as Russia does not find a way to protect its citizens in Finland, children and their Russian mothers will continue to disappear from their families in the Scandinavian country.