Russia can be in trouble because of Finland's new president

Finland elected a new president. It is Saul Niinistö, a 63-year-old right-wing politician, former Speaker of the Parliament and a representative of the Coalition Party. While he does not deliver Anti-Russian speeches, Russia still needs to be alarmed. Niinistö established himself as a politician who is not opposed to Finland's NATO membership. 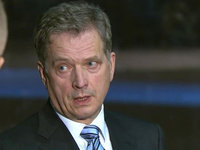 Niinistö won by a large margin. He enlisted the support of nearly 62.6 percent, while his rival, the representative of the "green" Pekka Haavisto, scored 37.4 percent. The losing candidate initially was unacceptable for the residents of the Finnish outskirts. An open homosexual who never served in the Army and who quit the church is too much even for such an "ultra-democratic" country as Finland. This means that for the next six years the country will be led by Niinistö.

Saul Niinistö is one of the oldest Finnish politicians with 35 years of tenure. At various times he served as the Minister of Justice and Treasury, and the chairman of the Parliament. In 2006 he ran for presidency, but lost to the outgoing President Tarja Halonen at least by four percent. For some time Niinistö served as the Deputy Director of the European Investment Bank and knows about the European policy firsthand.

With regard to the basic internal political guidelines of the new President, he advocates for raising taxes on the rich. Before, such statement from the right-wing politicians was virtually impossible, but the crisis dictates its own terms. Niinistö is considered a champion of European integration. He strongly objects the exit of Finland from the euro zone, but openly called the acceptance of Greece into Euro zone a mistake.

Since Finland is a neighbor of Russia, Niinistö's attitude towards Russia is a very important issue. "Many Russian tourists travel to Finland. At the same time many Finns are interested in and own businesses in Russia. We must create such conditions that our relationship continues to evolve smoothly," said Niinistö in a recent interview with Finnish television. According to him, Russia does not present a threat to Finland.

Niinistö said that the question of Finland's accession to NATO could be put to a referendum. In Russia, these words can be interpreted as support for Euro-Atlantic integration of the neighboring country with which it has 1,300 kilometers of common border. Niinistö's companion in the Coalition Party, Foreign Minister Alexander Stubb of Finland, is known as one of the most ardent "Atlanticists."

Another issue is possible territorial claims of Finland for Vyborg, Karelia isthmus and part of the territory of Karelia. Niinistö never made these claims, neither did Finland. However, there are well-known politicians among those who seek the return of these territories. The dissatisfaction with the introduction of the ban on the sale of land in the border zone in Russia was met with resentment among the country's top leadership. The new President's position is fundamentally important.

There are a few other important issues in the Russian-Finnish relations. For example, visas. Although the Finnish Consulate is different from its many colleagues in the EU because of its effective work, the leadership of Finland has never talked about the total abolition of visas. Niinistö has not yet paid particular attention to this issue.

On the first night after winning the elections, Niinistö did something that Russia was not particularly happy with. He appointed the deputy of the European Parliament from the Green Party Heidi Hautala the Minister of International Cooperation in the affairs of Finland. She is known for her close ties with the Russian non-systemic opposition. In addition, she has repeatedly criticized Russia for poor care of the preservation of the Finno-Ugric peoples.

What could the Russian-Finnish relations under President Niinistö be like? Should Russia be afraid of their deterioration and the accession of Finland to NATO? A Finnish professor and political scientist, chairman of the Finnish Anti-Fascist Committee Johan Backman answered these questions in an interview with "Pravda.Ru":

"Saul Niinistö cannot be called a supporter of the Finnish entry into NATO. He never openly spoke of accession to the North Atlantic Alliance. The very fact of his belonging to the right Coalition Party that is the biggest advocate for the development of ties with the U.S. says that he is not an "Atlanticist."

Niinistö's program on Russia reflects quite objective, realistic interests, focused on economic integration. Being a supporter of Finland's entry into NATO is equal to committing a political suicide. The recent polls showed that 68 percent of the Finns are dead set against NATO membership. Finland will never be its member, only a madman could demand this.

Niinistö has good political instincts. Here is an example from his biography. He was in Thailand in 2004 when the tsunami hit. Hundreds of people were killed around him, but he escaped. This man was born twice, and it left a mark on his life experiences. In addition, he worked briefly in the European structures, so for Russia such a partner is very convenient.

As for the topic of territorial claims, the very statement is offensive to people of Vyborg. This issue was settled in the Paris Peace Treaty of 1947. During the reign of President Martti Ahtisaari, who was born in Vyborg, there were a number of provocations on the Finnish side. But Niinistö is not a revanchist. "