The Finnish Minister of Justice visited Moscow on Wednesday. The purpose of his visit was to discuss the work of the Finnish-Russian children's rights commission. He will also discuss the case of Anastasia Zavgorodnyaya. Meanwhile, in Finland business involving children is becoming very profitable. Private orphanages cause interest among foreign investors. 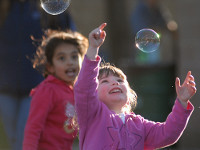 The Finnish-Russian children's rights commission will be created, but until recently the Finnish side stubbornly resisted it, arguing that it was contrary to the local laws. During his visit to Finland Prime Minister Dmitry Medvedev stressed the need to establish such a body because of numerous recent scandals involving Finnish social services taking Russian children away from their parents. The most discussed of them is the case of Anastasia Zavgorodnyaya, whose four children were taken away by the Finish social services.

Pravda.Ru obtained information that earlier the Finnish side promised Russian diplomats to stop taking Russian children away from their parents. Apparently, it was directly related to the forthcoming visit of the Russian Prime Minister. But before he could leave Finland, police broke into a house where a Russian mother and her children were staying. The children, including a two-month old daughter, were removed from the mother again.

What was the reason this time? According to a representative of the Russian Foreign Ministry Alexander Lukashevich, Finnish social services informed the Russian side that the children were taken at the request of their father, who complained of a violation of his right to communicate with them. Now he will stay with his children in a community center.

By making this decision, the Finnish social services completely discredited their work. Initially, they explained the need for the removal of all children, including a week-old baby, on a substantiated suspicion of abuse by the father. Allegedly, the eldest girl (six years old) at the doctor's office said that her dad slapped her on the butt.

Now, without explanation, children were given to their "cruel" father. Have all the charges against him been dropped? Have they existed at all?

Now the attention of the social services is turned to the mother. She is considered a "threat" to her children because she did not want to keep quiet about the incident. The drama in her family caused a wide resonance in the Russian society. Indeed, it was hard for any normal person to understand what a good mother could do to force social services to take away her children, including a week-old baby.

After the case of Zavgorodnyaya had been discussed by virtually all Russian media for a few weeks, the Finnish authorities got worried. However, they did not bother to justify the actions of the social services. The main problem was the negative image of a prosperous Finland painted by Russian media.

The Finnish Prime Minister stated at a meeting with Dmitry Medvedev that he was concerned about the image of Finland painted by the Russian media.

The image of Russia in Finland does not concern the Finnish side at all. On the website of the local health department there is a statement: "In Russia, violence against children is recommended by the authorities and is not considered a criminal offense." Thus, all actions of social services against Russian parents were automatically regarded as legitimate.

Today, those who are not afraid to talk about the true situation with the removal of children from their parents in Finland are under pressure. Human rights activist Johan Beckman was fired from his teaching position and received death threats. Women who told reporters about their situation are also getting threats.

Why such a strange reaction in a country proud of its legal system and protection of human rights? At a meeting with Medvedev, Finnish Prime Minister said that "we have to respect the rule of law." He clarified that issues related to individual families and specific people should not be discussed publicly in the media, but at the political level between competent authorities and institutions.

That is, the rule of law applies only to the ban on talking about massive removal of children in public.

But there is another reason why the Finnish authorities do not want public discussion of the issue. Business involving children is becoming extremely profitable in Finland.

Recently a leading Finnish newspaper Helsingin Sanomat published an article entitled "Protecting children is worth hundreds of millions." It turns out that government spending on this "protection" increased nearly four-fold over the past ten years. Today, municipalities spend 620 million euros a year for the services of private children's homes.

Private children's homes appeared in Finland in the 1990s. It was then, according to a Finnish newspaper, when the number of children in need of adoptive families has dramatically increased. Local municipalities were not able to meet the demand and had to resort to the services of private companies.

The publication reports that the maintenance of one child in such establishment costs the government from 100 to 350 euros per night. That is, in a year, this amount can reach nearly 130,000 euros.

Not surprisingly, foreign investors are drawn to this sector. The newspaper said that in recent years foreigners have been trying to capture this lucrative market by offering local companies to buy back their share on very favorable conditions.

After a law was passed in Finland in 2008 that gave social services the right to remove children from their families after any anonymous denunciation and possible suspicion, the number of children "in need of foster care" has further increased.

While a foster family is being selected for a child, the child may spend months or even years in an orphanage and thereby bring an impressive income.

The mechanism of creating a very successful business is very simple. The only thing needed is a constant influx of children, but it is easy to provide. Finnish human rights activists report that some local MPs have private orphanages. In the near future the parliament may pass a new law further expanding the powers of social services. Business must not stop.

Under the circumstances, the fate of Anastasia Zavgorodnyaya's children raises serious concerns. Likely, they have been already "promised" to an orphanage. Otherwise social services would not look for an excuse to remove them from their parents with such tenacity.

The only hope is that Russia assumes a tough position on the issue.