Finnish social services took a newborn child who barely turned a week from Russia's Anastasia Zavgorodnyaya. Prior to that, the services took away from the parents their 6-year-old daughter and two-year-old twins. Finland has the largest number of Russian families who fell victims of the social services. This year alone 35 Russians turned for help to the Russian authorities. 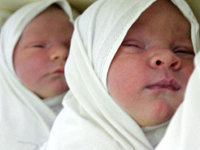 Until recently, Anastasia Zavgorodnyaya was quite happy with her family. She is a music teacher, and her husband is an engineer working in a private firm. The couple has four children, the youngest of whom had only recently been born. Their problems began with the incident at the school with their older child - 6-year-old daughter.

"During a recess some older kids took her by hand and pushed so that she hit her head against the wall. My daughter got sick and the teacher put her on the sofa. However, the teacher did not tell me anything about this incident. My daughter told me about it in the evening. In the morning she had problems with her speech, we got scared and took her to a doctor. Then we appealed to the school, and first the principal promised us to investigate, but then said that no one saw anything and our child was lying," Anastasia Zavgorodnyaya said in an interview with Pravda.Ru.

According to a Finnish law, the school is obliged to compile a report of all incidents. But the parents were refused their request to see the document. The insurance company that has requested a report for medical treatment of the child was not provided with the report either. Anastasia then decided to go to the social services that deal with child protection in the hope that they will be able to investigate. In fact, she was promised an objective investigation. Its results were immediate.

"Once a year, my daughter is scheduled for a speech therapy appointment in Helsinki. During the appointment she allegedly told the nurse that her dad slapped her on the butt, but no marks were found on the body of the child during the examination. Then we were told that the child we be taken away from us. When we disagreed, the police came and took my husband to a police station - for resisting the authorities," said Anastasia.

As it turned out, they were kept at the station only to enable an easy access to their twins, who were in kindergarten. At that time, Anastasia was in the last stages of pregnancy. She was promised that a newborn baby will not be taken away from her. But exactly one week after giving birth someone knocked at her apartment door. "I was waiting for a neighbor, and without any doubt, I opened the door - it was the police and social workers. They said they came for the baby," said Anastasia.

As they explained to the shocked woman, "because the father hit the eldest girl he can hit the baby as well." She was told that they had nothing against her. According to Anastasia, she offered to move out with the child and to live separately from her husband during the investigation. Her request was denied. The social services did not allow the mother to come into the foster family that was taking care of the baby to breastfeed. "I was told that this is not necessary," she said. This inhuman behavior of the social workers is legally well-founded. Finland has adopted a law that social services can come to any family and take away the children without a court decision if they feel that the children are at risk.

Now the social services are conducting their own investigation into the incident that may last up to two months. If it reveals that the parents should be stripped of their parental rights, then a court hearing will follow. "We wrote a statement to the court that we objected to the removal of the children, but as we were explained, our statement would not be considered earlier than in six months," said Anastasia. Both the investigation by the social services and the trial may take a very long time. All this time, children have to be in foster care.

Finland is on the very top in the ranking of the countries that take Russian children away from their parents. This year, the Russian authorities were contacted by 35 families whose 49 children were taken away. The Russian authorities have repeatedly offered to their Finnish colleagues to establish a joint commission to resolve conflicts related to the removal of children from the Russian citizens living in Finland. It was not successful, and the Finns persistently rejected all proposed options. Encouraging information emerged following a meeting in late September between Russian Foreign Minister Sergei Lavrov and his Finnish counterpart.

Lavrov told at a news conference that it was "agreed that we will collectively, together, in a spirit of mutual respect address the issues associated with controversial cases involving the rights of children in family, guided, above all, by the interests of the children." According to him, the Russian Foreign Ministry will ensure that "every child, especially a citizen of Russia, feels comfortable in all circumstances, and that their rights and interests are protected. This also applies to situations related to adoption, and this applies to situations with mixed marriages."

The Finnish social services were prompt to provide an opportunity to test the Russian minister's words in practice. Vladimir Putin's Press Secretary has confirmed that once the President receives a report from the Ombudsman for Children in Finland to take children away from the Russian parents, he will instruct the Foreign Ministry and other organizations to deal with such situations.

The attention drawn by the story of Anastasia Zavgorodnyaya gives hope for more decisive actions of the Russian authorities to protect children. However, it should be remembered that a law similar to the Finnish one, offering unlimited rights to social services, has already passed in the first reading in the State Duma. This means that Russia is following the same path as Finland recognizing the implicit right of the state to interfere in the affairs of the family. Who would Russian citizen appeal to for help in this case?