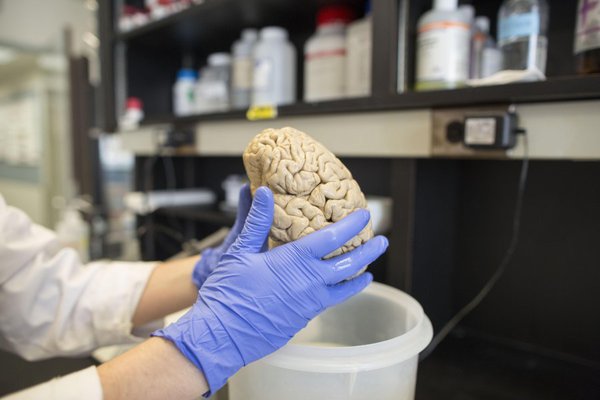 Iranian researchers and scientists have shown the first herbal remedy to treat Alzheimer's called Melitropic. The drug was released during a ceremony at the Iranian Institute of Medicinal Plants at the Academic Center and Education, Culture and Research (ACECR) on Saturday morning.

Iranian scientists have produced the world's first herbal medicine to treat Alzheimer's disease or prevent it from progressing through relieving symptoms such as memory loss and confusion.

The drug, called Melitropic, was released during a ceremony at the Iranian Institute of Medicinal Plants at the Academic Center and Education, Culture and Research (ACECR) on Saturday morning.

Iranian Minister of Health, Hassan Qazizadeh Hashemi, the president of Jihad University, Seyed Hamidreza Tayebi and several researchers were present at the event.

Researchers have historically grounded in the country's extensive experience in treating brain disorders, used the latest related studies in the world to produce this herbal medicine.

Dr. Shamsali Rezazadeh, president of Jihad University's Institute of Medicinal Plants, said that a series of clinical trials were conducted on 42 patients with early-onset to moderate Alzheimer's symptoms to determine the effectiveness of Melitropic.

He added that Dracocephalum extract - a genus of phanerogamous plants belonging to the Lamiaceae family - was administered to those in the experimental group, patients in the control group received placebos.

Rezazadeh said that forgetfulness and recognition rates and possible side effects were analyzed after four months of studies; and the results showed an obvious and noticeable improvement in the mental state of the patients, who had been given Dracocephalum extract.

According to Rezazade, anxiety disorder and irritability symptoms had been considerably reduced among subjects in the experience group.

The president of the Institute of Medicinal Plants of Jihad University emphasized that certain measures were taken into account in order to introduce Melitropic into the world markets.

The effects of Cannabis can improve the consumption of energy by the brain, which is deficient in Alzheimer's Disease, according to the results of a study led by Cellular Neurosciences and Biology Center (CNC), University of Coimbra (UC), Portugal and the Cajal Institute - Centre for Biomedical Research in Neurodegenerative Diseases, in Spain.

The future challenge  of this discovery in mice, recently published in the journal Neuropharmacology, lies in the separation of negative and positive effects of Cannabis consumption.

The major psychoactive ingredient of marijuana, tetrahydrocannabinol (THC) acts on two receptors, "CB1" and "CB2", located in the brain, which are distinguished as "bad police and good police." The CB1 receptors are associated with neuronal death, mental disorders and addiction to various drugs or alcohol. In contrast, CB2 receptors nullify many of the negative actions of CB1, protecting neurons by promoting glucose consumption (energy) by the brain and reducing dependence on drugs.

Attila Köfalvi, first author of the article, explains that "through various laboratory techniques, we conclude that the CB2 receptor, when stimulated by chemically modified THC analogues to interact only with the CB2 receptor without activating the CB1, avoiding the psychotropic effects and keeping beneficial effects, promotes increased glucose uptake in the brain."

Additional experiments with other techniques showed that this effect of CB2 is not limited to neurons but extends to other brain cells that help the functioning of neurons, the astrocytes. "In the future, this discovery could pave the way for a palliative therapy in Alzheimer's disease," notes the researcher.

The research was funded by the Award Belard Santa Casa da Misericordia, DARPA, ERDF, NSRF - Regional Operational Programme 2007-2013 Centre with the support of Mais Centro and the European Union and Operational Programme Competitiveness Factors via the Foundation for Science and Technology.