Young people who smoke cannabis or marijuana for six years or more are twice as likely to have psychotic episodes, hallucinations or delusions than people who have never used the drug, scientists said on Monday. 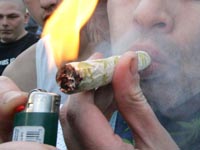 The findings adds weight to previous research which linked psychosis with the drug -- particularly in its most potent form as "skunk" -- and will feed the debate about the level of controls over its use.

Despite laws against it, up to 190 million people around the world use cannabis, according to United Nations estimates, equating to about 4 percent of the adult population.

John McGrath of the Queensland Brain Institute in Australia studied more than 3,801 men and women born between 1981 and 1984 and followed them up after 21 years to ask about their cannabis use and assessed them for psychotic episodes. Around 18 percent reported using cannabis for three or fewer years, 16 percent for four to five years and 14 percent for six or more years.

"Compared with those who had never used cannabis, young adults who had six or more years since first use of cannabis were twice as likely to develop a non-affective psychosis (such as schizophrenia)," McGrath wrote in a study published in the Archives of General Psychiatry journal.

They were also four times as likely to have high scores in clinical tests of delusion, he wrote, and a so-called "dose-response" relationship showed that the longer the duration since first cannabis use, the higher the risk of psychosis-related symptoms.

A study by British scientists last year suggested that people who smoke skunk, a potent form of cannabis, are almost seven times more likely to develop psychotic illnesses such as schizophrenia than those who smoke "hash" or cannabis resin.

Previous studies had also suggested smoking cannabis can double the risk of psychosis, but the British study was the first to look specifically at skunk. Skunk has higher amounts of the psychoactive ingredient THC which can produce psychotic symptoms such as hallucinations, delusions and paranoia.

A international group of drug policy experts published a book earlier this year arguing that laws against cannabis have failed to cut its use but instead led to vast numbers of arrests for drug possession in countries like Britain, Switzerland and the United States, which cause social division and pointless government expense.