Superflare may cause $40-billion-worth damage to US economy daily

The emergence of a super-powerful solar flare and a geomagnetic storm that it may entail will cost the US economy $40 billion every day after the disaster. 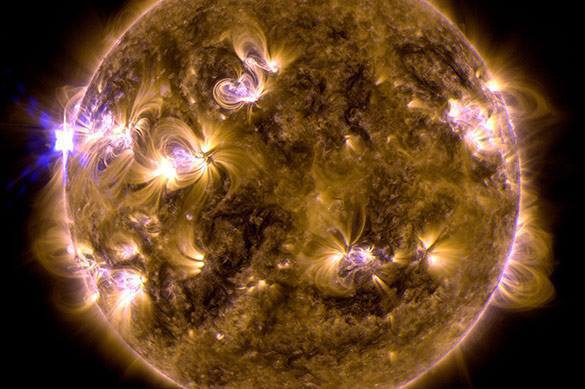 Explosive releases of energy on the sun in the form of visible light, heat and X-rays may at times occur in the form of so-called superflares. Extra powerful solar flares break through the magnetic shield of the Earth, disrupting the work of radio and communication systems, satellites etc. Thus, a superflare in 1989 deprived Canada of much of its power grids, causing the damage of 13.2 million dollars.

British astronomers attempted to find out how extreme "space weather" may affect the performance of various sectors of the US economy, including industry and the work of governmental and financial agencies. Edward Outon of the University of Cambridge and his colleagues created a computer model of how solar flares may affect the economy of the United States.

According to Space Weather magazine, the destruction of electricity networks will not be the only and the main problem that superflares may cause the United States. Most of the damage will be associated with direct and indirect destruction of infrastructure.

According to the researchers, industrial enterprises will suffer most because of irregularities in the work of computer networks and satellite communications. A solar flare will also affect the work of the US government, financial and insurance companies.

Should the power of the superflare be comparable to the Carrington Event (the most powerful superflare ever recorded that occurred in 1859), the daily damage caused to the US economy would be around $40 billion and about $7 billion for international trading partners. These numbers account for 100 percent USA's daily GDP. According to the scientists, a superflare may affect a half of the country's area and 66% of its population.

A solar flare is a phenomenon that strikes imagination. Generally, a solar flare lasts only for a few minutes, but it embraces all layers of the atmosphere of the star. A solar flare releases the amount of energy equivalent to many billions of megatons of TNT.

Earlier, European scientists at the University of Aarhus and the International College from Denmark, Belgium, China and Italy warned of a possible solar superflare that may destroy life on Earth almost entirely.

Four of the stars that the scientists were studying through Kepler and LAMOST telescopes would emit up to one trillion of megatons of TNT in just a few minutes.

On the basis of their study, the scientists concluded that the nature of solar flares and superflares on other stars is most likely identical. At the same time, the power of superflares of the observed stars exceeded solar flares by tens of thousands of times.

World
USA should always remember it keeps part of Russia - Alaska
13:32
Former adviser to US Secretary of Defense: Ukraine may disappear from the world map
12:46
Boris Johnson resignation: Another one bites the dust
12:33
Sky News: Boris Johnson agrees to resign
21:21
The Future of Extremist Populism in Contemporary American Politics
20:39
For the sake of profit, the West is ready to make the conflict in Ukraine endless
19:22
Expert reveals how Russia can respond to Western threat without nuclear weapon
18:57
US military expert: Russian victory in Ukraine is predetermined
18:49
Russian truckers attacked with pneumatic weapons in Lithuania
18:35
Brazilian model, who worked as a sniper in Ukraine, died
18:04
Polish Defense Minister сalls Ukrainian Ambassador Melnyk a Kremlin's useful idiot
РусскийDeutschFrançaisPortuguese