The Russian space solar observatory known as TESIS photographed a series of powerful flares on the Sun. Each of the subsequent flares was more powerful than the previous one. Scientists said that they could observe such strong flares more than two years ago. They believe that the Sun tries to wake up and end the long period of the minimal activity. 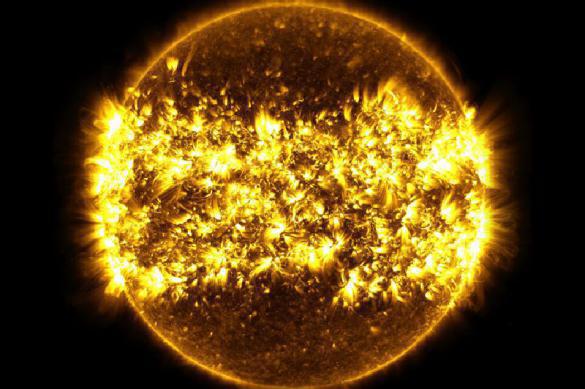 A Russian-made satellite delivered a system of telescopes, TESIS, on Earth’s orbit nearly a year ago. The system is designed to conduct the non-stop monitoring of the solar activity. TESIS receives and transmits to Earth the information about all events taking place on the surface of the Sun. The system provides the X-ray observation and the description of the Sun’s magnetic field among other functions.

The system gives scientists an opportunity to be informed about all changes happening on the surface of the Sun, including outbursts of the solar activity. On January 19, the system registered a series of bright flares. The power of the flares was growing gradually.

The first flare with the rate of C4.9 took place on the Sun at about 9 a.m. Greenwich Mean Time. The next flare – C5.2 – took place several minutes later. The most recent record of the solar activity was reported on December 16, 2009 at the rate of C5.3.

At about 13:30 o’clock the Sun emitted the largest portion of power in the history of observations. Astronomers assigned the rate of M2.3 to the flare in accordance with GOES (Geostationary Operation Environmental Satellites). It was the first M-flare of the new cycle which set a new record of activity.

Solar flares are classified in accordance with their power. There are A, B, C, M and X flares. The digit next to the alphabetical symbol indicates the gradation of power within the class.

The scientists who analyzed the information provided by the TESIS system said that the flares on the Sun were becoming more continuous and powerful. The telescopes photographed M1.7 flares at 20:30 January 19. Another similar flare was registered in the morning of January 20. Nevertheless, the activity has not reached its maximum yet, and scientists say that the Sun will set a number of records at this point.

No large flare has occurred on the Sun since the summer of 2007, when the peak of the solar activity subsided. The Sun remained still for an unusually long period of time.

The X-ray radiation from the recent flares exceeded the standard dose three times and reached Earth’s orbit in minutes. X-ray waves led to numerous incidents of interference in the work of satellites and GPS devices.

The source of the flares has not been determined yet. Scientists are currently exploring two areas of the Sun’s surface. One of them, identified as 1040, moves on the northern hemisphere of the star and gradually goes behind the horizon, becoming unavailable for visual observations. The second area is a new one. The area gradually moves to the visible side from behind the horizon of the southern hemisphere.

If the new area is the source of the flares, it will mean that the Sun and the entire solar system will fall under the influence of this sunspot that will control space weather until the end of the month.