Solar flare could cause a geomagnetic storm

This particular solar flare was formed on the 23rd of January, according to NASA 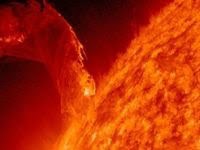 NASA announced this week that a solar flare occurred following a magnetic storm, which occurs when these particles come into contact with the magnetosphere.

The National Aeronautics and Space Administration (NASA for its acronym in English) reported Friday that a solar flare is traveling to Earth at a speed of about 600 kilometers per second and could cause a geomagnetic storm on Earth in the next three days.

According to information published on the website of the Agency, and based on data from the Solar Terrestrial Relations Observatory (STEREO) and the Solar and Heliospheric Observatory (SOHO), the solar flare occurred on January 23rd, and was accompanied by coronal mass ejections (CME, for its acronym in English).

The NASA portal reported that a CME can launch into space with its solar particles taking within one to three days to reach Earth, causing the planet to experience the weather phenomenon known as 'geomagnetic storm.'

NASA explained that a magnetic storm occurs when these particles come into contact with the magnetosphere, the Earth's magnetic cover, over a long period of time.

There are currently four sunspots visible on the "Earthside" of the sun. None of the sunspots are emitting flaming activity at this time. Three new sunspots will reportedly be showing in the coming week.

Other coronal mass ejections from previous similar speeds have not provoked geomagnetic storms, but have caused auroras near the poles.

According to astronomers, it is "unlikely" that the storm will affect electrical systems or telecommunications systems.

As the sun prepares to hit its 11-year cycle peak, both scientists and common folk concerned about the consequences of a maximum solar flare are becoming more vocal.

What would happen to our antiquated power grid if a strong Earth-directed coronal mass ejection occurs, it may offer precious hours of warning before such a hit reaches our atmosphere.

What happens to millions if they are suddenly left without electricity for several months?

Both NASA and the National Oceanic and Atmospheric Association (NOAA) have noted that CMEs are expected to peak in 2013.

Although a massive coronal mass ejection will not likely cause any physical harm to humans, the civil unrest such an incident could prompt creates the possibility for loss of life.
Experts estimate that a massive solar flare could cause $2 trillion worth of damage.

Scientists estimate the chance of an M-Class solar flare happening at this time at no more than a 10 percent.