Chinese and European astrophysics admitted the possibility of a solar superflare that may become deadly to many living beings on the planet. 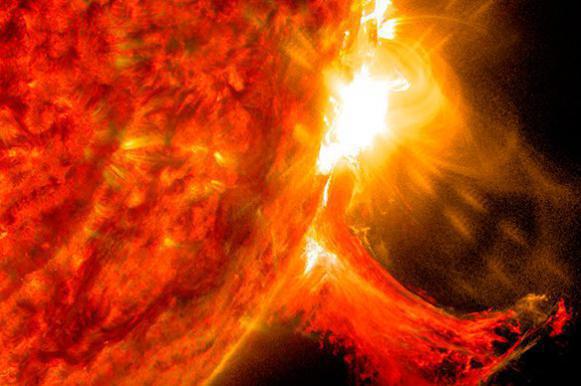 However, Russian experts believe that we have nothing to be afraid of. The most recent solar superflare did not cause massive deaths. Pravda.Ru asked expert opinion from the head of the department for solar-terrestrial ties of the Institute of Terrestrial Magnetism, Ionosphere and Radio Wave Propagation, Doctor of Physical and Mathematical Sciences, Vladimir Obridko, to find out whether solar superflares can be as deadly as some scientists say.

According to Vladimir Obdirko, scientific knowledge of sun-like stars gives reason to expect increased solar activity every 10-15 thousand years, or once in five thousand years at least.

"All that we know about the physics of the Sun today, about the mechanisms of solar flares, shows that such a flare is extremely unlikely. A very strong solar flare occurred 150 years ago. It led to some negative consequences for our planet, but they were not deadly," the scientist said.

A superflare may cause damage to communication and navigation systems; satellites may lose orbit. For people with cardiovascular diseases, a solar flare is fraught with slight ailments.

"A solar superflare that may claim millions of lives, as some bold newspaper write, is absolutely excluded for our sun presently. There are absolutely no reasons to worry about that," the expert told Pravda.Ru.

Speaking of solar threats, one should mention the phenomenon of solar activity that may also have a negative impact on the population of the Earth. Yet, the likelihood of a critical threat is minimal. "In the next 10-20 years, we can expect decrease in solar activity and decrease in the probability of powerful solar flares," said Vladimir Obridko.

According to the scientist, asteroids are much more dangerous than superflares.

"There were periods of global extinctions in the history of the Earth. It is still believed that the mass extinction of dinosaurs was connected with the fall of a giant meteorite, even an asteroid," the scientist said.

Modern science can predict solar flares long before the phenomenon occurs. As for asteroid impacts, they can be predicted years before the possible collision may occur. There is an international program, in which Russia participates, the goal of which is to divert near-Earth objects to prevent possible destruction on the planet.

"A solution is to change the trajectory of an asteroid to make the space body fly Earth by. There are technologies for that already. In cosmic terms, planet Earth is a tiny object that any asteroid can technically miss," the scientist told Pravda.Ru.