The Russian public opinion research center has recently conducted an opinion poll devoted to the current demographic crisis and possible ways out of the situation. Seventy-five percent of the polled Russians said that a certain raise of family allowances could ease the depressive situation and provide more or less acceptable living conditions for young Russian families. 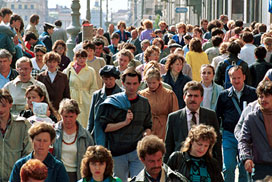 The majorities of respondents said that the Russian population does not face the danger of extinction, although it does experience severe demographic problems. Forty-four percent of the polled said that they viewed the situation in the country as critical.

The poll has proved that the demographic crisis in Russia was taking rather dangerous forms. According to the Russian Statistics Committee, the death rate in Russia is 1.7 times higher than the birth rate. If this tendency is preserved during the forthcoming years, the Russian population will reduce by 2050 to 80 or 10 million people only (calculations conducted by the Russian Academy of Sciences and the Statistics Committee).

Russians' concerns about their future mirror the real state of things with the national demography. Thirty-seven percent of the polled believe that the crisis is directly connected with alcohol and drug addiction. The general ageing of the population and the decreasing number of able-bodied citizens was pointed out as serious problems by 14 percent of respondents who participated in the opinion poll. AIDS, sexually transmitted diseases and the increasing amount of HIV-infected individuals exacerbates the demographic crisis in Russia, nine percent of the polled said. The growing amount of immigrants in the structure of the Russian population is considered a negative trend in the present-day Russian society too, according to five percent of respondents.

Many Russians believe that the general reduction of the birth rate, connected with the declining living standard of the population is the basic reason of the current demographic crisis. Forty percent are certain that the current conditions have been caused with the legacy of the Yeltsin era and the social policy which his administration conducted in the country. Thirty-one percent of the polled look for the roots of the problem in declining public morality, pointing out the weakening of family values.

The material factor was named as the most efficient way to overcome the crisis. Seventy-five percent of Russians said that government needs to raise family allowances to young families. Forty-five percent said that one should develop the social infrastructure first and foremost (schools, kindergartens, etc). Twenty-four percent of respondents said that they believed in the effect of healthy lifestyle propaganda. Very few people (from one to four percent) pointed out the need to introduce the grounds of the Orthodox culture.

The poll revealed that people of limited means had a better understanding of the problem. Quite on the contrary, financially secure and wealthy Russians do not think that such a problem as depopulation actually exists in the country.

”The country with the 144-million strong population may experience a strong lack of labour force in the future. Up to 60 percent of Russians are elderly people, children and disabled individuals,” the Minister for the Regional Development of Russia Vladimir Yakovlev said in the spring of the current year.

It seems that the Russian government does not take any measures to extricate from the crisis despite such depressive results of the poll. The mortgage program is the only kind of support, which the government can offer for the time being.

The current economic policy of the Russian government bears some resemblance to the 1960s, when Nikita Khrushchev allowed women to make abortions, which subsequently relieved many women of maternity burden and attracted them to the national economy.