In actuality, the above scenario is not a piece of fiction, it is a bitter reality of the last few years. Statistics gathered by the Russian State Committee for Statistics and a dozen of private sociological organizations highlight the latest developments. As regards the ingenious population in the southern and central parts of Russia, the situation is quite critical. Unofficial data say there are 3-4 migrants from the North Caucasus and Central Asia for every ten locals in Stavropol and Krasnodar regions. The number of strangers will equal that of the ingenious population in another 5 years. It is hard to imagine a peaceful way of solving this problem. 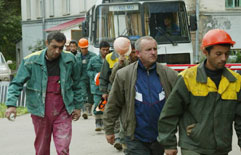 Migrants keep coming to Russia despite the lack of farming lands and business opportunities. They do not arrive in large numbers as before, though. Migrants from the North Caucasus and Central Asia have been heading for Siberia in the last 3-4 years. National diasporas began to mushroom in the old Siberian towns and cities. According to the police, 84 238 foreign nationals have been registered in Ekaterinburg in the last 9 months. There is a colony of 300 thousand migrants officially registered in the city of Orenburg. Novosibirsk has 200 thousand migrants. China with its billions of people is waiting in the wings south of Siberian borders.

China is taking its time. The Chinese are apparently waiting for the right time to lay claims to the territories. The right time would mean no Russians left in Siberia, only strangers from Central Asia and Caucasus.

All-Russian forum “The Muslims on the verge of a third millennium” was held in Nizhny Novgorod last Sunday. Shamil Sultanov, the State Duma deputy, was one the participants who took the floor at the forum. According to him, the Islamic world is not a principal enemy of Russia. The West is Russia's enemy that is planning to break up Russia by 2015. Speaking to KP, he said the following:

“The Western world is based on mass consumption. The West has already digested all the civilizations but the Islamic one. The Islamic civilization does not integrate into the Western values. The West is keen to import cheap labor which is mostly the Muslims. The Muslims do not want to go apart from their values and religion. They do not want to turn their women into sex symbols. Taking into account the above circumstances, a clash of civilizations looks imminent.”

“Do you take sides with those Muslims who are burning down church buildings in Europe?”

“I take sides with the moral and religious principles. It is wrong to assume that Americanization of Russia started in the 1990s. They took the first step in 1961 once the concept of material paradise was in place.”

“President Putin refused to follow the instructions devised in Washington. His policy is much smarter. On the one hand, he keeps saying that Russia is part of the West. On the other hand, Russia is interested in developing cooperation with the Islamic world.”

“That was the right move. There are 20 million Muslims in Russia. And the Islamic World regards Russia its northern stronghold.”

“However, the situation will aggravate by the year 2008. The West wants to remove Putin and his team from power. They want to put their puppet on top and get Russia ready for sale.”

“It is just a bit of deceit when you hear people say that the West embodies Christianity. Spengler once said that Christianity had been dead, it had transformed into culture. Those who call themselves Orthodox Christians are largely concerned about their work, family, clothing. Their thoughts about god are scarce. Because faith is a very hard job.”

“Does violence similar to that in Europe lie ahead for Russia?”

“No, nothing of the kind will happen in Russia. Our immigrants are former Soviet citizens. The USSR was a powerful melting pot. The Tajiks who arrive in Moscow have a Soviet mentality.