Russian government suddenly worries about the lack of patriotism in Russia

Was the collapse of the USSR the greatest tragedy of the 20th century (according to President Putin) or the act of salvation from the communist lies?

The government allocates 500 million rubles for “patriotic education of citizens.” Patriotic holidays are introduced. Patriotic channels are opened on TV. Spin doctors dust off Minin and Pozharsky after writing off Stalin and Dzerzinsky. Have the authorities become suddenly  concerned about the state of mind of the Russian people? 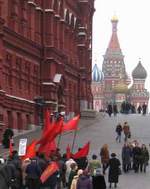 Both the Left and Right seem to be itching to play patriotism these days. Gennady Zyuganov, the leader of the Communist Party of Russia, hands out membership cards to young Muscovites who just joined the Komsomol - the Communist Union of Leninist Youth. President Putin awards “For Services to Fatherland” to Nikita Mikhalkov, a well-known Russian film director and a monarchist. Moscow mayor Yuri Luzhkov puts paragraphs of the national anthem onto the advertising boards in central Moscow. Patriotic columnists frown on Halloween and St. Valentine Day. Long live our own Baba Yaga!

In actuality, the government has goods reasons for concern. Latest public opinion polls show that only 7% of Russian citizens accept the national flag, anthem and coat of arms as symbols of a new Russia's. We do not need a sociologist to see our Duma deputies and ministers trying hard to lip-synch when they have to partake in the singing of the national anthem. Their lips are moving. But the sound is pre-recorded and comes out of unseen loudspeakers.

Servants of the people are normally bashful when it comes to reasons behind the lack of patriotism in Russia. The people are well aware of those reasons. Unlike bureaucrats, they keep their attitude and emotions in the open. About 40% of respondents in an opinion poll used the word “shame” when asked to describe their basic attitude to Russia. The bureaucrats still refuse to acknowledge the fact that skepticism with respect to the symbols of the state stems from the lack of credibility to the authorities. People usually cite examples from the Soviet era or more distant past when asked to present facts of history Russia can be proud of.

There is a direct link between material well-being and the spirit of a nation. One's own house, family values, freedom, and a decent life have always formed the foundations of patriotism in the West. They are still the cornerstone of it. They are a few things worth fighting for.

Limitless love for the bosses as a new kind of ideology shown today by United Russia is unlikely to become a cornerstone of patriotic education in Russia.

We can see the authorities bring back moth-eaten slogans like “Moscow is a heroic city” and “Russia is our Fatherhood”. Instead, they should focus on the fight against the main evils of this country i.e. poverty and corruption. Just imagine slogans like “Detroit is a heroic city” and “Britain is our dear Fatherland” hanging across the street somewhere in the United States or Britain. It is simply impossible because it can not happen.

Russia has no policy that could be a source of inspiration and spiritual revival. Democracy and reforms are being debased by the authorities. The powers that are still mending the old Soviet soldier's blouse while delivering well-done speeches about the market economy and a new Russia. We are stuck somewhere in between the moldy socialism and criminal capitalism. The old holidays are canceled while the new ones are still hanging askew. We have not yet understood the meaning of the collapse of the Soviet Union. Was it the greatest tragedy of the 20th century (according to President Putin) or the act of salvation from the communist lies?

We still have Karl Marx and the mummy of Lenin, we have Limonov, Khodorkovsky, Limonchik, Turkmenbashi and Lukashenko. Who is a hero, after all? And who is a villain?