There are a lot of pizzerias and coffee shops in the center of the Italian capital, near Roma-Termini railway station. One can see picturesque palm trees growing nearby and homeless people sitting behind them on wide street curbs. Those people are basically natives of India, which can be seen by their bright clothing. However, one may find Russian vagabonds among dark-skinned street beggars too. 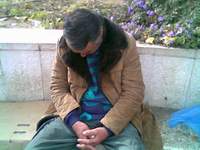 Mikhail is only 29 years old. He looks like the majority of his Russians “colleagues” dressed in shabby and dirty clothes. The young beggar has been living in Rome for two years already. Mikhail agreed to share his story with a correspondent of the Smena newspaper for only four euros.

”I come from Moscow. When I was 13 years old, my mother died and my father sent me to an orphanage. I could live there for only one year and then I escaped. That was the time when I started wandering about the city, panhandling and collecting empty bottles and cans. Then I started “working” as a beggar in the subway,” Mikhail said.

The never-ending persecution of the police made Mikhail move over to St.Petersburg, where he stayed for five years. “I was a “veteran of the Afghan war” in St.Petersburg, singing songs in the metro. We were ousted by a group of more professional “Afghan veterans” afterwards, so I had to look for something else again. I decided to go to Finland for a start, for it made no difference to me where I would be begging for money.

The man sneaked on board a ferryboat traveling from St.Petersburg to Finland. “It was very easy afterwards. I traveled to Helsinki by train, where I found a lot of Russian beggars in the streets. Some of them told me to go to Italy. They said that it was much warmer there and that the Italian police were rather agreeable,” Mikhail said.

”I hitchhiked all the way to Italy from Finland, which was a very good deal. I met a lot of good and kind-hearted people on the way to Rome – they drove me across Europe for free. I arrived in Rome from Bavaria: I saw a huge truck with Italian numbers on a car park there. When I looked inside the truck I saw a lot of furniture there – armchairs, sofas and so on. That was a very comfortable journey. When the driver found me there, he nearly killed me, but I managed to escape,” the man said.

At first I was begging for money in the Roman metro, but I had to give up on that very quickly: the Italian police do not tolerate tramps in the metro. “They arrested me on several occasions, but I pretended being deaf, so they had to do nothing but release me. I would be happy to live in an Italian jail, I've heard that Italian prisoners enjoy their living in prisons, Mikhail said.

When Mikhail lost his source of income in the metro, he started looking for survival on Rome's central railway station. There are ticket-selling  machines installed on the Roma-Termini station: a lot of tourists forget to take the change, when they buy a ticket from the machine. “I can make up to 20 euros on a good day, although I usually make five or ten euros,” the Russian beggar said.

Mikhail, the tramp of the Russian origin, enjoys living in such a warm country as Italy. The man says that he has a good perspective too: he dreams to work in a church, sitting beside the entrance and opening the doors. This is one of the most lucrative occupations for the Roman beggars. Church-goers and tourists often feel sorry for the unfortunate “doormen” and throw money to them. However, it is very hard to win the vacancy because of a large number of candidates.