”I am not indifferent about Russia's future, and what kind of person will be ruling the state, to which I devoted my entire life”

President Vladimir Putin gave an interview to Dutch journalists yesterday. One of the questions, which Western journalists ask President Putin traditionally, was connected with the now-jailed former head of the Russian oil giant Yukos, Mikhail Khodorkovsky. 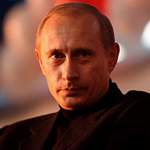 When asked if it was possible to have a different outcome of the notorious Yukos case, Putin answered that the people standing behind the back of the state bring only damage to both their citizens and foreign investors, who try to work in the Russian economy. Putin particularly reminded that the court issued its decision on the case: “There is nothing good about it. It is quite sad on the one hand. However, if the law is being broken, the state must react accordingly within the framework of existent legislation. This is not an aspect of destabilization. Quite on the contrary, it is an aspect of stability and power of the state,” Putin said.

Answering the question about the extensive coverage and vivid reaction, which the Yukos case received in Europe, Putin said: “If you could make a fortune of five or six billion dollars just in several years, I am sure that you would be able to cause a similar reaction too, trying to protect your own interests in Europe and in the whole world.”

Vladimir Putin does not think that NATO is a Russia-unfriendly organization. Russia is willing to establish partnership with different countries and organizations, including NATO. “Moscow has developed several directions of cooperation with NATO. “They include anti-terrorist struggle, joint efforts to prevent various states of emergency, etc. We are currently launching a joint anti-terrorist project in the Mediterranean Sea with the use of the Russian Navy,” Putin said.

The Russian president did not say, though, if Russia was ever going to become a NATO member. “This organization has been undergoing certain internal transformations. We need to understand, what we are going to join, if it happens in reality and which objectives we will have. As for its own security, Russia has been an independent state historically, capable of defending itself alone,” the president said.

In the interview Putin excluded an opportunity for Russia to break up. “I never wake up with this idea. I exclude it entirely,” the president said. When asked about his abilities to govern such a large country as Russia, Vladimir Putin answered that the efficiency of  statesmanship does not depend on the size of a country. “The geographical size of a country certainly influences the form of its government. However, the history of mankind and the present day of many large powers shows that the forms of administration of large states can be efficient,” said Putin.

It is well known now that Putin prefers not to talk about his plans after the end of his second presidential term in Russia. When Dutch reporters asked the president about his plans after the year 2008, Vladimir Putin simply said: “Every normal human being has plans. I cannot imagine a person without plans,” said he. Putin added that talking about the future was not considered a good tradition in Russia: “It will depend on how we live and what we do today,” the Russian president said.

When talking about the current terrorist activities in Russia and abroad, Vladimir Putin compared Shamil Basayev and Osama bin Laden to rats, who prefer to hide and save their lives, setting up their followers. When one of the journalists asked Putin why Shamil Basayev was still free, Putin responded with a counter-question: “And why cannot they capture Bin Laden then? Because such people as Basayev and Bin Laden hide like rats and make their followers suffer instead.”

Putin reminded that there were other terrorists in Chechnya, beside Basayev: “A lot of them have been liquidated, many took the side of their nation and the federal forces and started working in governmental agencies of Chechnya,” the president said.

When asked about his opinion regarding the actions of the Russian troops during the recent terrorist attack on the city of Nalchik (in Russia's south, close to Chechnya), Putin said that the results of those actions could speak for themselves: “According to our estimates, the terrorist group, which attacked Nalchik, counted about 150 gunmen. Ninety-three of them have been destroyed and 40 arrested,”Putinsaid.

Speaking about the problem of terrorism on the whole, Vladimir Putin reminded that Russia was one of the first countries to face terrorism on its territory. It happened as a result of the break up of the Soviet Union, the general weakening of the state, the collapse of the national economy and the social sphere,” the president of Russia believes. “However, terrorists will never be able to defeat the nation, which used to destroy Nazism. First and foremost, the inner sense of self-protection is extremely strong with Russians and other peoples of Russia,” Putin emphasized.

Vladimir Putin stressed out during the interview that he was not going to control the Russian media. The president added that he had neither any possibilities nor wishes to run such activities. Instead, the president said that there were about 47,000 newspapers and magazines and about 3,000 TV and radio companies registered in Russia today. “It is impossible to control all that even if one wanted to do it intentionally. I am not talking about the Internet, which has been developing in Russia without any control at all, taking into consideration the fact that the number of Internet users in Russia constantly grows,” Putin added.

On the other hand, Putin acknowledged the existence of certain problems with freedom of speech in Russia. “We have problems especially on the regional level and I am aware of them,”  Putin said. According to the president, the freedom of press in Russia is one of the basic conditions for the development of democracy in the country.

Vladimir Putin does not have any grave memories of his childhood: when a child, Vladimir Putin could feel attention and love of his parents. The president said that he was growing in a communal flat in a room, the square of which was only 20 meters. Both of his parents were common workers.

When asked about a possibility for Russia to join the European Union, Putin said that he liked to hear such words: “If you call us, we will think about it. Thank you very much, it is pleasant for me to hear this question. I would be happy, if it could happen,” Putin said. However, the president added that it would be incorrect for Russia to ask for the EU membership.

Putin understands Norway's standpoint on the matter. Norway is a rich and independent state, it is not a member of the European Union, although some countries of Eastern Europe try to obtain the EU membership at all costs just because it will improve their economy and raise the living standard, as they think. “What if we at first make Europe as the continent of no borders? Why do we talk about human rights in general? Let's give people a possibility to travel freely. Let's set real objectives and try to accomplish them,” the president said.

Answering a question about rather complicated relations between the federal center and the Caucasian nations, President Putin said that there was a whole bouquet of interethnic conflicts on the territory of the Russian Federation: “The struggle between various ethnic groups has been going on for hundreds of years. As a result, Russia is a country, different parts of which stabilize its existence. The history of complicated relations between  different territories of Ireland and other parts of Great Britain lasts for more than 400 years. But it does not occur to anyone to break the nation up. I would rather think of the factors, which unite the country,” the president concluded.

Speaking about his successor on the presidential post, Putin said that he was of course not indifferent about it: “Of course, I am not indifferent about Russia's future, what kind of person will be ruling the state, to which I have devoted my entire life. However, if every new president starts changing the constitution, this state will turn to an empty place. I perfectly realize that the period after the year 2008 will be a crucial point for Russia. I will not let any destabilizing factors happen for the interests of the Russian Federation and its peoples,” Vladimir Putin said.

Answering a question about the vision of his role in history, Vladimir Putin said: “The less you think about you being a part of history, the more chances you have to accomplish that, if there is such a need in this goal at all. One just have to work honestly to earn luck and success,” the President of Russia said.