Those states, which used to be in very warm and friendly relations with the USA, start criticizing its policies today 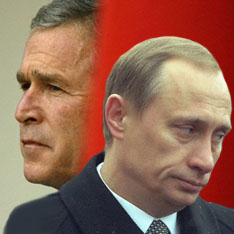 There are some Western figures, though, who say that any reintegration on the territory of the former USSR is useless and ineffective, even if Russia participates in it.

The world took a bipolar form of political organization after the end of WWII. There was the USSR and its allies on one side and the USA and its satellites on the other side of the world. When the Eastern bloc collapsed, the bipolar period ended as well. The world had the following choice to make: either to acknowledge the power of only one state or find another way out of the situation. These two tendencies still exist nowadays.

When the USSR broke up, the USA perceived the disappearance of its adversary as the triumphant victory in the Cold War. The United States has been trying to prove to the rest of the world since that time that it is the only country in the world, which has all indications of a superpower. The “American world” is the uni-polar global organization, in which the USA is the only indisputable supremacist state, whereas all other countries have to agree upon such conditions. Therefore, Washington's influence embraces the whole world: planet Earth becomes the zone of USA's vital interests. Globalization in this case can be paraphrased as Americanization.

There is another variant too: the world can develop on the base of the multi-polar organization, which deprives the USA of its global advantages. The first of the mentioned two variants is the predominant one nowadays, whereas the second option is more of a future possibility. The uni-polar world acknowledges the existence of regional leaders, although they need to fit in the US-led political and economic lines. On the other hand, the multi-polar world implies the existence of several political and economic powers that will be capable of running US-independent policies.

The new independent states, which appeared after the collapse of the Soviet Union, had only two options to choose from: either to exist autonomously or find a new protector instead of Russia. The choice in Washington's favor seemed quite reasonable at this point: the USA is the world's strongest country from the point of view of defense and economics. The pro-Brussels orientation inthe development of the former Soviet states did not conflict with the choice, for NATO and the European Union were perceived as Washington's regional creations. The so-called New Europe made of former member-countries of the Eastern bloc, is therefore the most pro-American oriented part of the EU as opposed to Old Europe.

However, the experience of the recent 15 years showed that the assumption of the USA's generosity and protection does not work always, to put it mildly. Washington follows the English principle in its foreign policy (there are no permanent allies, but there are permanent interests), making it even more grotesque, though: a person, whom the USA views as a “good old chap” today may become a bloody dictator and international terrorist tomorrow. Such a perspective is not good for everyone, of course.

However, there is one more highly important aspect in the notion of the “American world:” the status of the global stronghold of democracy should not raise doubts with anyone. Zbigniew Brzezinski wrote in one of his recent articles that the Bush's administration has undermined the seemingly guaranteed American predominance on the international arena during the recent four years. Those states, which used to be in very warm and friendly relations with the USA, started criticizing its policies openly. As a result, a lot of states in many regions of the world – East Asia, Europe and Latin America – are trying to set up their own regional alliances that would be less connected with traditional schemes of cooperation with the United States. The current trend may therefore become a peculiar feature of the future organization of the world.

The Organization of Central-Asian Cooperation was established as a regional structure, which eventually proved to be inefficient. Kazakhstan, Kyrgyzstan, Tajikistan and Uzbekistan failed to come to a universal agreement with each other and invited Russia to participate. However, it does not mean that the development will start on its own volition: cheap energy resources or a large market is not enough to give a start to a powerful integration process. Natural resources obviously affect the state of Russia's influence on its allies, although they are not enough for long-term, stable and friendly relations. Unlike Great Britain, for example, Russia has always had its permanent/traditional allies, which made other countries pay attention to Russia.

The organization of the post-Soviet space has not been finished yet. Some alliances, which appear on the territory will prove to be stable organizations, whereas others will have their members coming and going depending on various internal and external factors. However, it is always easier to destroy rather than create. The USA has been losing its influence in Central Asia recently. The Russian  administration has a very good chance to use an opportunity to the benefit of its own and of the whole region.