Moscow turned Ms. Rice down on Iran, but the USA is not willing to aggravate relations with Russia at all

US Secretary of State Condoleezza Rice arrived in Moscow on October 14 with a short unscheduled visit. Ms. Rice conducted negotiations with the head of the Russian Foreign Minister Sergei Lavrov and then had a meeting with President Vladimir Putin. The subject of the talks was devoted to the nuclear program of Iran; the officials also touched upon the current state of affairs in Central Asia and other countries of the Commonwealth of Independent States. 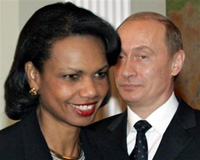 Condoleezza Rice's visit to Moscow became quite a surprising political event in Russia's political life. The secretary finished her Asian tour, flew over to Paris, but suddenly changed her plans and headed to Moscow. Brushing the abrupt turn of events aside, one may say that Ms. Rice's visit to Moscow was meant to happen sooner or later against the background of USA's worsening relations with some of the Asian states of the former USSR and a whole bouquet of other problems in the US-Russian relations.

During her talks with the Russian Minister for Foreign Affairs, Sergei Lavrov, and then with President Putin, Condoleezza Rice was trying to prove to the Russian administration that there was absolutely no need for Iran to develop even a peace nuclear program. The nuclear power plant in Iran's Bushehr, Rice said, may become the site to produce weapons of mass destruction.

The Russian officials clearly said, though, that the construction of the above-mentioned power plant, in which Russia has been involved for 12 years already, was not going to be stopped. Furthermore, Minister Lavrov said that there was no need to send the IAEA's report on the nuclear program of Tehran to the UN Security Council. On the other hand, Russia is not interested in making Iran become a nuclear power, the minister concluded.

The USA is quite concerned about another Mideastern state, Syria. In addition to terrorist-supporting accusation, the US administration suspects the Syrian government of plotting the assassination of the former Lebanese Prime Minister, Rafik Hariri. Russia, however, does not intend to shut down the ongoing cooperation with Syria either.

One may thus infer that the USA has received a clear token of Russia's disagreement upon the creation of the “new Middle East” under the US guidance. Russia will continue its cooperation with Syria and Iran and keep the right for estimating all possible risks.

As for Central Asia, Ms. Rice had to experience another failure: neither Kazakhstan, nor Tajikistan agreed to provide their territories for the deployment of the US army base, which had been previously withdrawn from Uzbekistan. The servicemen and personnel of the base will thus have to be moved to Kyrgyzstan. Russian officials said that the USA would be able to keep its military base in Kyrgyzstan as long as it is required for the continuation of the anti-terrorist operation in Afghanistan.

It is worthy of note that Russian officials do not understand the requirement of their US colleagues to grant access to international experts for the investigation of recent events in the Uzbek town of Andijan. Russia is certain that the government of Uzbekistan is capable of handling its internal matters alone.

According to the US Secretary of State, there are no forbidden grounds for Russia and the USA, that is probably why Condoleezza Rice touched upon the issue of the current situation in another state of the former USSR, Belarus. It is an open secret that the US administration urged all democratic states to decline contacts with Belarussian President Alexander Lukashenko. Ukrainian politicians, for example, prefer not to follow the American instructions: they still visit the country's capital, Minsk, when necessary.

Moscow and Washington obviously have different approaches in their estimations of certain international political issues. Apparently, Ms. Rice had to hastily change her plans and visit Moscow not to let these discrepancies grow and lead to serious consequences in US-Russian relations. One may not say that the USA enjoys stable international positions at present moment. To crown it all, the US administration cannot afford ruining relations with Russia, which has a huge influence on the majority of its neighbors.