Russia to help China oust the USA from Eurasia

Russia de facto loses the status of the world's center of force, which jeopardizes the global stability

The rapidly developing economy of China pushes the country to search for sources of raw materials and sales markets abroad. The USA is China's major obstacle in this respect. China and the USA have been sharing their spheres of influence since 1979, when a semi-secret US-Chinese agreement about the strategic coordination was brought to light after Dang Xiaoping's visit in Washington (the USA prefers to keep the document a secret). The significance of the agreement could be compared to protocols to the Molotov-Ribbentrop Treaty. Bill Clinton prolonged the agreement in 1999. China has been consistently asking the USA to withdraw its presence from Eurasia. The USA, however, believes that it can refer to Russia and the entire post-Soviet space as its catch. 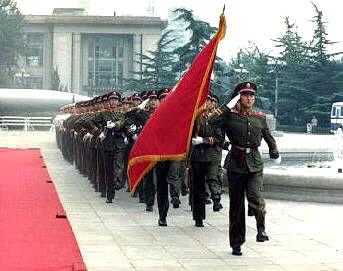 It was China, which preserved Russia's integrity during the US triumph in 1991-1993: the dismembered Russia would deprive China of the strategic back area. In its struggle for Russia, China will inevitably try to put an end to USA's expansion attempts towards the Far East of Russia. One may expect Chinese politicians making statements about the USA's threat to Russia: China and the USA will most likely commence negotiations about the division of the spheres of influence in the Far Eastern region.

When the USSR collapsed in 1991, China was left alone face to face with the USA. The conflict potential of relations between the USA and China has been growing nonstop since then. One may say that the USA has been involved in the conflict with China from 2003, although it is a financial and economic struggle so far. The war of the American and Chinese economies may be toughened by 2009 with US-placed embargoes. China might exercise its military potential in return with a view to demoralize the West. China has been trying to restrain and oust the USA from Eurasia with a threat to destroy the US dollar as the global measure of value.

The nuclear field as the field of political maneuvers for Russia.

A maneuver as an aspect of war is always possible, even when there are no efforts to strike a blow. The year 2005 is the year, which marks the final revision of WWII results and the removal of the world order, which the winning powers set in Yalta and Potsdam in 1945. The period of 60 years is the basic cycle of changes of a certain historic field. The new world order can be characterized as the globalization, North American style.

Establishing the control over Russian nuclear objects is a rather important issue for the USA. This problem is currently being successively solved under the disguise of mutual security and cooperation in the anti-terrorist struggle. Russia de facto loses the status of the world's center of force, which jeopardizes the global stability.

According to the laws of changes, the three-polar world order with any type of centralization is harmonious and safe: a nation, which does not wage a war, wins. The world of the second half of the 20th century was exactly like that: the USA and the USSR were the active poles of the forces, whereas China was like an absorber between them.

According to the law of the struggle of the opposites, any bi-polar world order is dangerous. Those, who will not be making preparations for a war will inevitably lose. This is the description of the world in the beginning of the 21st century: the USA found itself in the bi-polar world, not in the unipolar world, as it may seem at first sight. China will become a visible center of force in 2007, when it declares its ambitions for influence to the USA.

Russia may make a political maneuver to return to the stable form of the triangular world structure.  The USA's dual control over Russian nuclear objects changes the pattern of mutual obligations for members of the Non-Proliferation Treaty. In other words, Russia's agreement for control over its nuclear objects should be linked with addenda to the Treaty in the part of the dual control in other countries too. Furthermore, the globalization in the North-American style requires Russia's membership in the World Trade Organization. The coercive membership implies that participating states should not have any territorial claims to each other. Japan is the state, which sets most serious territorial claims to Russia. Japan's refusal to give up its claims would be a worthy way out of the situation. The refusal could be linked with Japan's obligation to become a nuclear state. Japan could receive nukes from Russia, along with the technical help for their servicing and the dual control over the nuclear force of Japan.

Japan as a nuclear power would balance the nuclear problem of North Korea (Japan's former colony): the China-Japan-Korea triangle would be created. North Korea's nuclear status, which was declared in the spring of 2005, deprived Japan of its face, which could be compared to Russia's dual-control-diminished sovereignty. On the other hand, North Korea's nuclear status poses a problem for the USA, which loses control over the affairs in North-Eastern Asia, the control over the spirit of South Korea and Japan, first and foremost.

Japan's nuclear status will relieve the nation of the American guardianship, which may open a perspective for building new groups with Japan as a full member of world politics. Special terms for Japan's connection to the Russian base of natural resources would also save Japan from the USA's devastating oil and gas price pressure. A possible blockade against Japan could be aimed against the USA: Japan could require the return of Micronesia islands, which were given away to the USA as a trophy after the end of WWII. It is noteworthy that the islands received the status of the US free association in 1986, in defiance of the UN Charter.

Strategy of retreat as a way to the Russian victory

As a WTO member, which Russia obliged to become before 2006, Russia will not have a right to “defend itself” from the movement of Chinese and Japanese capitals: only the Western capital has preferences until Russia joins the WTO.

The attraction of Chinese and Japanese capitals on the territory of the Russian Far East (within the framework of the WTO) will make for the financial and economic expulsion of the USA from Eurasia. China and Japan will thus obtain the strategic back areas in Russia's Siberia and the Far East. Being China's and Japan's back area, Russia avoids being a front. Otherwise, Russia will inevitably become a battlefield between the USA and China.

The strategy of retirement is not a light-minded strategy to abandon the front. It is a way to victory with the help of a political and economic maneuver to avoid the direct opposition with the dominating adversary.