The Russian T-14 Armata tank will serve in the army for at least 25-30 years before it is replaced with combat vehicles developed on new physical principles, Colonel-General Sergei Mayev, former chief of the main auto-armored department of the Defence Ministry believes. It is worth noting that the Armata tank, just like the Su-57 fifth-generation fighter aircraft, has not been passed into service yet. Yet, Russian military officials already want to know what weapon will come to replace it. 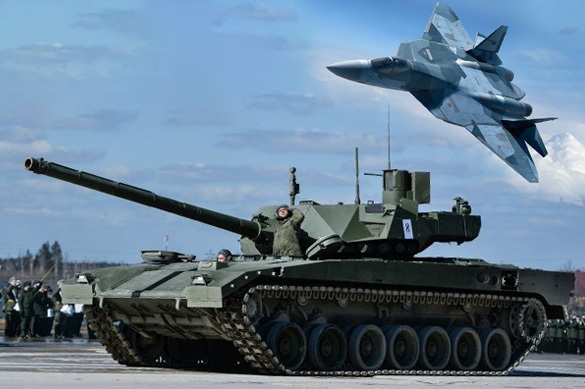 According to Sergei Mayev, such platforms as Armata, Kurganets-25 and Boomerang, which Russia has been working on lately (they are at the final stage of development), are traditional weapons. They will be replaced with new arms systems based on new physical principles. However, this can only be possible against the backdrop of the favourable development of fundamental science, technology, design thought, production and financing of all these aspects.

According to Mayev, ground robotic armoured vehicles are to appear in about 10-15 years. "As for the air force, opportunities for using robotic weapons in the air are, of course, more homogeneous than for those used on the ground," the specialist said, TASS reports.

In general, a lot has been said in Russia during the recent several years about new weapons based on new physical principles.

"The development of arms systems based on new physical principles does not mean that Russian physicists have discovered new fundamental physical laws in secret laboratories and are now going to apply them in the defence industry. There are absolutely no secrets about physical laws in general, but in this particular field it goes about certain physical phenomena that we have never used in the development of arms systems," the expert said.

At the same time, the new technologies are being developed at the time when Russian military engineers are still working on new traditional weapons, such as Armata tank and Su-57 fifth-generation fighter aircraft (formerly known as T-50 PAK FA).

A few days ago, Russian MP, president of the League of Assistance to Defence Enterprises, Vladimir Gutenev, said that there was no need to speed up the mass production of the Su-57 fighter aircraft. In his opinion, in the era of rapid technological development, the Su-57 fifth-generation fighter will  become obsolete quickly. Therefore, one needs to focus on the development of the sixth-generation aircraft. "The Su-57 will not be massively introduced at the Russian Air Force, but the aircraft has a wonderful export potential, and many countries already want to purchase it," Gutenev told Interfax.

Deputy Prime Minister Yuri Borisov said in an interview with Rossiya 24 TV channel that the Su-57 had made a good showing so far, including in Syria, where the aircraft could demonstrate its flight performance and combat capabilities in practice. At the same time, Borisov noted that one of the best aircraft in the world today is a representative of the previous generation "4+" - Su-35.

Apparently, the question of price is the most important one here. Both fighter jets and Armata tanks are much cheaper than Western analogues, but at the same time they are quite expensive for the massive rearmament of the Russian army.

Western experts talk about it as well. Paying tribute to new models of Russian weapons, they pay attention to their price, which becomes the main problem.

Naturally, this is not a problem of Russia alone. During the NATO summit in Brussels, US President Donald Trump was salivating in his calls for the allies to increase military spending. In addition, a lot has been said about the F-35 program that has generated quite a number of high-profile scandals, including because of the price issue.

Yet, the Americans can sell their aircraft to NATO allies and compensate costs at least partially. Russia has no such opportunity, if we talk about mass exports. How can Russia sell its fighter jets and tanks if the Russian army is unwilling to pass them into service?

Director of the Center for Analysis of Strategies and Technologies, Ruslan Pukhov, noted that the problem has several aspects to it.

"The new armament program, which was adopted last year, is superimposed on the previous one, for 2010-2020. The current program is designed from 2018 to 2017. First, it is not so ambitious, and not so large as the previous one. Russia has finished its rearmament program. Most importantly, the Russian economy does not generate as much money as it used to, when oil prices were high," the analyst told Pravda.Ru.

"Therefore, we need to treat military spending thoughtfully. Any kind of military spending, by definition, takes money away from such things as roads, healthcare, education, etc. There is always a temptation to cut a number of expensive programs, and Russia has already done that. In particular, we have sacrificed expensive naval programs, such as the Storm aircraft carrier and Leader class destroyers," said Ruslan Pukhov.