How can the West destroy Russa's Armata tank?

Any new product of the Russian defense industry is seen as a challenge in the West. Needless to say that any challenge should be answered to. At Eurosatory 2016 arms show, Rheinmetall unveiled its latest development - a 130-mm tank gun. Journalists immediately dubbed the new gun as a would-be killer of the Russian Armata tank. Are they correct? 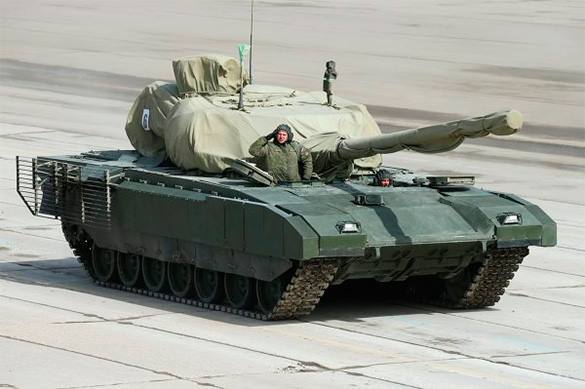 Originally, tanks would be armed with any type of available guns, because there was no time to develop something new. It just so happened that the British would arm their first tanks with 57-mm cannons that had been originally designed for destroyer vessels. The French would use 37-mm and 75-mm infantry guns, and so would the Germans. The shells that would be used for first tanks, would have no explosives in them at all - shrapnel and even buckshot would be good.

During the 1930s, in the intervals between the two wars, tanks would be equipped with 37 and 47 millimeter guns. A Soviet experimental TG tank was designed having two guns at the same time (76-mm and 37-mm). The tank became the strongest tank in the world, but its serial production was never launched. T-26 and BT tanks were equipped with 45-mm guns that Russia never had before.

The first models of T-34 and KV tanks were equipped with a 76.2-mm gun. The Russian military decided to cut the length of the tank barrel short to match the size of the body of the machine so that it could demolish brick walls without poking its long barrel at them. Interestingly, the US military  shortened the barrel of the Lee M3 tank in a similar fashion. It took engineers many years to take a different approach to the problem.

During WWII, the velocity of the projectile had become probably the most important factor, and the length of tank barrels started growing rapidly. In 1942, the German tank T-IV was outfitted with a gun, the barrel length of which had grown from the original 43 to the 48 caliber. The speed of their armor-piercing shells had been increased significantly. The 75-millimeter 70 caliber gun of the "Panther" tank had excluded all those guns as its armor-piercing shell could develop the speed of up to 924 meters per second.

In response, Soviet designers outfitted modified T-34 tanks with 85-mm guns with a heavier shell.   The British had kept the caliber of their gun unchanged, nor had they increased the length of the  55 caliber. Instead, the British increased the gas pressure in the barrel, and their armor-piercing shells would be shot at a speed of 884 meters per second - a bit less in comparison with the Germans. However, long barrels would vibrate like fishing rods on firing, and the accuracy of long barrels was not the best. At the end of the war, the Germans were planning to outfit their tanks with 100-caliber-long guns, although to no avail.

After the war, the competition between the calibers of tank guns continued. To catch up with the Soviet 85-mm cannon, the British equipped their "Centurions" at first with  83.4-mm cannon, and then - 105-millimeter L-7, the internationally recognized tank gun. The Americans equipped "Pershing" tanks with 90-millimeter guns, while the USSR mounted 100-millimeter guns on T-54 tanks. Heavy tanks of England, the USSR and the USA would be armed with 120-122 millimeter guns.

Afterwards, the Soviet T-62 received a 115-mm smoothbore gun, and the T-64 and T-72 - a 125-millimeter gun. Soon afterwards, all major foreign tanks would be rearmed with the 120-mm gun Rheinmetall (made in Western Germany), as well as with a smoothbore one, like Russian 125-millimeter guns. Nowadays, the same German company showcase a gun of increased power, 130 millimeters in caliber.

Anti-Armata tank gun does not exist

The gun was made in May 2016. The tests of the new gun started immediately after Eurosatory-2016 arms show.

Let's start with the fact that the caliber length of the newly unveiled gun is only 51 which is not too much at all. Yet, the capacity of the gun is said to increase by 50%. The gun has a chromed surface of the barrel to enhance its strength and performance. As long as the weapon is expected to be mounted to the turret, which is a manned part of the tank, the gun is outfitted with an ejector for pumping powder gases out акь the barrel. The total weight of the weapon is about 3,000 kilograms, the "netto" weight of the barrel is 1,400 kg.

The new gun is expected to shoot only Armor-Piercing Fin-Stabilized Discarding-Sabot (APFSDS) rounds, with longer than before tungsten cores and combustible sleeves; and high-explosive air-bursting munition (HE ABM), which is currently in the works on the basis of the 120-mm DM11 round.

Rheinmetall representatives say that their new 130-mm gun will be ready for serial production in 2025. For the time being, the gun cannot be mounted on the Leopard tank as a new turret design is required first.

Interestingly, a few years ago, the same company tried to create a more powerful 140-millimeter tank gun. However, even the 140-mm gun was inferior to a Russian pilot 125-mm tank gun. An unmanned turret can house both a 125 millimeter gun and a 152-mm caliber gun. In a nutshell, building a super powerful tank gun is not enough as the new gun has to match the design of the tank, for which it is going to be built. A new gun can hardly increase the power or an outdated tank.