Facebook is likely to be blocked in Russia if the company does not comply with requirements of the law on the storage of personal data of Russian users on the territory of the Russian Federation, the head of Roskomnadzor Alexander Zharov told reporters Tuesday. 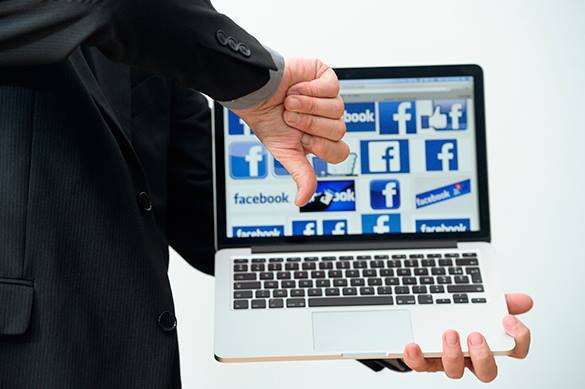 It is worth recalling here that Facebook has been mentioned a lot recently in connection with the investigation of Russia's alleged interference in the US presidential election.

Earlier, Facebook founder Mark Zuckerberg said that the social network would deliver information about the case of Russia's alleged "interference" in US elections to Congress. "We are actively working with the US government on its ongoing investigations into Russian interference. We have been investigating this for many months, and for a while we had found no evidence of fake accounts linked to Russia running ads. When we recently uncovered this activity, we provided that information to the special counsel. We also briefed Congress -- and this morning I directed our team to provide the ads we've found to Congress as well," Mark Zuckerberg said.

The Washington Post continued developing the topic and wrote that Russian accounts on Facebook attempted to resort to political ads to sow discontent on racial and religious grounds among American citizens.

With all oddity of such "investigations" in mind, it is obvious that the topic of Russia's "interference" in US elections through Facebook has been a focal point lately. We do not know, of course, whether all the media hype in this connection is artificial. Yet, we do know that censorship on Facebook is not a rare phenomenon. One can try and experiment with using offensive words, such as, for example, "hohol" (a Russian derogatory term designating Ukrainians) or "katsap" (a Ukrainian derogatory term designating Russians). If you use these words on your posts on Facebook, you will see that moderators will react quickly, and their reactions will be different.

Russia's information technologies and communications watchdog, Roskomnadzor, does not have any claims to Facebook either about its participation in Russiagate case or the bias of its moderators. At least, this has not been stated publicly. The head of the agency claimed that Facebook will have to either meet the requirements of the Russian law about the storage of personal information or leave the Russian market. The head of the agency said that Facebook is aware of the need to comply with the law, but Roskomnadzor has not received any information confirming Facebook's intention to act accordingly.

LinkedIn was blocked in Russia in November 2016 for the above-mentioned reason: the social network refused to comply with the law on the storage of personal data. LinkedIn had about 2.5 million users in Russia vs. Facebook's 12.7 million as of February 2017.

Amendments to the law on personal data were adopted in 2015. The document obliges both domestic and foreign companies to store the data of Russian users on the territory of the Russian Federation.

Facebook has a lot of time to think. As experience shows, harsh statements can be made at any moment, but they are not made to burn bridges - they are part of negotiations.