The Karakurt: Small, but powerful vessel capable of sinking US aircraft carriers

Russia's Defence Ministry does not have the budget of the Pentagon, but the Russian defence department is very good at showing ingenuity. This is how the Karakurt appeared - a small and very dangerous ship, an heir to Soviet armoured boats and German underwater "wolves." 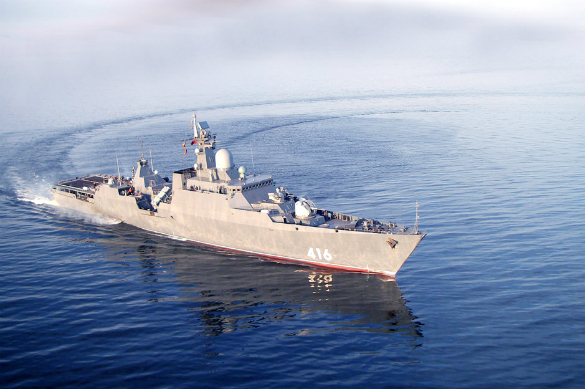 According to Wikipedia, the karakurt is spider species from the genus of black widows. They are small and highly venomous creatures that may cause massive death of livestock. Yet, they never attack first.

The Karakurt is also a new Russian development: a missile ship, a small, but highly manoeuvrable vessel. The Zelenodolsk plant named after Gorky readies their serial production. The "head" of the project under conditional number 22800 is "Almaz" Central Marine Design Bureau (St. Petersburg).

The Karakurt develops the speed of about 30 knots (5 knots less than that of its closest analogue, Gadfly, that has superior running qualities). The new ship will not be able to make circumnavigations. The estimated range of its navigation is 2,500 nautical miles with the autonomy of up to 15 days. The ship is designed to work along coastlines.

Its cannon deck accommodates eight launchers for Caliber-NK missiles and/or supersonic Onyx missiles with a range of up to 500 km.

Caliber-NK missile complexes are known for their remarkable efficiency that they demonstrated during military operations in Syria. Russia launched those missiles from the water area of the Caspian Sea and used 3M14 missiles for the operation. These missiles have the multi-stage jet engine, which makes it possible to accelerate to Mach 3.5 (speed of sound). Russian missiles have never covered such long distances before, but the debut was a success.

Russia creatively uses the WWII experience - the know-how of German Grand Admiral Karl Dönitz. Unlike other fascist naval commanders, Dönitz did not consider massive bulky battleships effective. His point of view was proved right when two German giants - Tirpitsa and Bismarck - sank along with tens of millions of Reichsmarks and thousands of German seamen.

Dönitz came up with a new naval tactic known as "wolf packs." Those packs consist of inexpensive (in comparison with battleships) submarines, equipped with state-of-the-art weapons to be able to chase and destroy the enemy.

Russia's present-day tactic of using surface missile boats is somewhat reminiscent of the "underwater" strategy of the German Grand Admiral. Dönitz was not the only architect of the tactic: the strategy of the Soviet Union was developing in the same direction.

Not very many people remember the events that happened in 1941 on June 24-25, when four Soviet armoured boats taught the Romanians a lesson in the area of Cape Satul-Nou. The effect of surprise, shallow draft and serious weapons for this class of vessels allowed the unexpected guests to defeat the Romanian military and land troops. The second landing of the Kili group ended in the seizure of the city of Chilia Veche (Romania).

The Karakurt shows that in order to confront the heavy machine of the US defence industry, Russia is forced to achieve maximum efficiency per unit of invested funds. The budget of the Pentagon exceeds $600 billion, whilst that of Russia is only $50 billion, which is even less than the add-on that US President Donald Trump has recently obtained for the US defence industry ($54 billion).

This tactic is reflected in the defence budget of the Russian Federation, in which more than 60% of the funds are assigned for innovations (experimental design). Before 2021, Russia expects to increase the number of high-precision missiles 30 times to thereby force Washington to create the costly anti-missile "umbrella."