Russia and China: The dragon and the bear build new world order for themselves

The meeting between the leaders of the Russian Federation and the People's Republic of China,  Vladimir Putin and Xi Jinping, is to take place in Moscow on July 3. The leaders of Russia and China are expected to sign a package of agreements totalling over $10 billion. 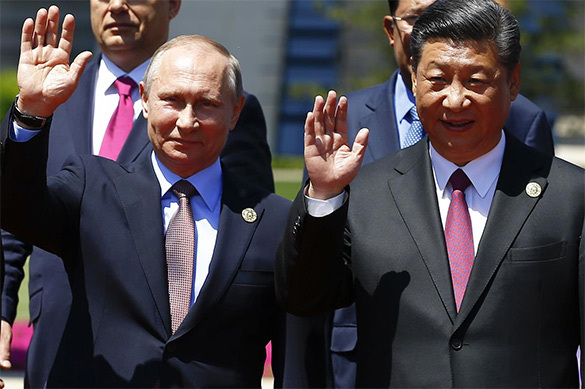 Vladimir Putin and Xi Jinping have had more than 20 meetings in the past with three of them taking place this year. Yet, today's meeting in Moscow is said to be an event of the year. Both Russian and Chinese officials speak about an unprecedentedly high level of development of relations between the two countries.

In a recent opinion poll, as many as 41 percent of Russians said that China was Russia's prime ally, from which Russia may expect support in times of need. Minister for Foreign Affairs of the People's Republic of China, Wang Yi, speaking on Hong Kong's Fenghuang TV channel, said that China was  ready to provide Russia with any type of assistance - from economic to military help, if need be.

The Trump administration, just like the team of his predecessor Obama, seems to be unable to find a common language with China. During Xi Jinping's recent visit to Washington, President Trump informed his Chinese counterpart about the missile strike on Syria when having a chocolate cake. Many assumed that Xi Jinping would not forgive Trump for that.

Pravda.Ru requested an expert opinion on the subject from Sergei Ordzhonikidze, chairman of the Russian Public Council for International Cooperation and Public Diplomacy under the Public Chamber of Russia.

"What do you think the main topic of the meeting between Xi Jinping and Vladimir Putin will be? How can you characterise the relations between Russia and China?"

"I would agree here with the opinion of unbiased political scientists, who point out progressive nature in the development of Russian-Chinese relations in all areas - in economic, military field, in tourism and so on. I think that the union of Russia and China is not a union against someone - this is a union for Russia and China in the first place. Russia lives under the conditions of international sanctions, and China may find itself in a similar situation because of the crisis with the Americans in the South China Sea.

"China invests heavily in Russia, while Russia builds a nuclear power plant for the Chinese and sells its arms there. There are no territorial disputes between Russia and China. The two countries  have a common and close position on most political problems of today's world. I believe that the Russian-Chinese relations today are an example of how the countries should build their diplomatic relations. Look at the amount of Chinese tourists in Moscow.

"The better we know and understand each other, the more effectively our relations will develop. I think that this visit will be a pinnacle event, and we do expect a lot from it in the areas that I have mentioned."

"Do you think that the Americans may not be happy about Russia's developing relations with China? Some believe that the USA may try to set Russia and China against each other with the help of the fifth column and make the Russians believe that the Russian administration is selling out the country to China. It particularly goes about islands near the city of Khabarovsk. Do you think this plan can work?"

"Yes, this plan can always be relevant. Of course, the Americans are concerned. Yet, Russia and China have no territorial claims to each other. Neighborly relations between countries should be built with a clear understanding of where the border between the two countries runs. Russia and China now have this understanding. Russia and China also have a clear understanding of how they can help each other. Take, for example, the UN Security Council voting. China and Russia often vote together and use a veto together on most serious and major issues. Approach to the Syrian crisis, approach to Iraq, the demilitarization of the Korean Peninsula - Russia and China share similar positions on these issues. No matter how hard the Americans may try, I do not see areas of interstate relations where Russia could have friction with the Chinese.

"The Chinese in no way pretend to dominate in Central Asia, they help us in this region. We are members of the BRICS - the current state of affairs in the Russian-Chinese relations serves as an example of neighbourly, friendly and mutuality beneficial relations."