Russia used its veto right and blocked the UN Security Council draft resolution about investigation into the facts of the chemical attack in the Syrian province of Idlib. The draft resolution was submitted by the UK, the USA and France. 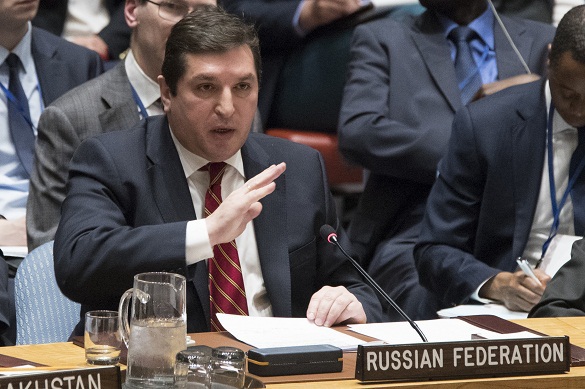 Ten members of the UN Security Council supported the document. Russia and Bolivia voted against it. Permanent representatives of China, Ethiopia and Kazakhstan abstained from the vote.

Vice Ambassador of the Russian Federation to the United Nations, Vladimir Safronkov, explained that the draft resolution, against which Russia voted, accused Syrian authorities of the chemical attack against civilians without any investigation conducted into it.

"Such an outcome was predictable, because we have been persistently expressing our strong disagreement with the erroneous concept of the document that was not undergoing any changes as events and consultations were developing," Safronkov stated at the meeting of the UN Security Council.

"Russia's priorities and concerns were completely ignored and even shrugged off under artificial pretexts. The main problem is that the draft resolution had designated the perpetrators before objective and independent investigation. This approach is incompatible with standards of justice," the Russian diplomat added.

France's Permanent Representative to the UN, Francois Delattre, earlier said that the draft resolution was "simple and balanced." The new version of the document coincided with what the three countries proposed last week. The older version contained a number of requirements to the Syrian authorities, in particular, to provide UN and OPCW experts access to military air bases, RIA Novosti reports.

Russia harshly criticised the first version of the draft resolution prepared by the United Kingdom, the United States and France. Afterwards, Russia submitted its own draft document for discussion.

The third, compromising variant was submitted by ten temporary members of the Security Council, including Bolivia, Egypt, Italy, Kazakhstan, Senegal, Sweden, Ukraine, Uruguay, Ethiopia and Japan. However, the Security Council decided to postpone the consideration of the draft resolutions on April 7.

On Tuesday, April 11, UK Permanent Representative to the United Nations Matthew Rycroft announced that the three countries had elaborated the revised draft resolution on Syria condemning the chemical attack and requiring full cooperation in its investigation.

At the same time, Rycroft stressed that all members of the UN Security Council, in his opinion, should support the revised version of the resolution.

Yet, Russia's representative Vladimir Safronkov used the informal form of address and shamed his British counterpart prior to the vote on the resolution condemning the chemical attack in Syria. Before Russia blocked the document, the Russian and British officials stoked up the war of words.

Matthew Rycroft accused Russia of abusing the veto right and stated that trust in Russia was evaporating because of Russia's "shameless" support for the regime of Bashar Assad.

Russia's Vladimir Safronkov delivered an emotional speech in response. The Russian official accused Rycroft of attempts to hamper efforts for the establishment of the peaceful dialogue in Geneva.

"The speech from British Ambassador Rycroft has shown that he only thinks about hampering your efforts, Mr. Mistura, to stop the development of the political process and bring confrontation and hostility to the Security Council," Safronkov said.

The Russian official believes that the UK fears Russia's possible cooperation with the USA. "You're afraid, you can't sleep, because you think that we can cooperate with the United States. You're afraid of that! You're doing everything possible to undermine this cooperation. That's why...Look at me! Don't look away! Why are you looking away?" Safronov said addressing Rycroft in an informal way. "That's why you've said nothing today about the political process. You have not listened to Mistura's speech. You set forth humiliating requirements to guarantors of the negotiating process in Astana. But what have you done to cease fire? You welcome illegal armed groups in London and Paris!" are continued.

The chemical attack in the town of Khan Sheikhun in the Syrian province of Idlib took place on April 4. According to various sources, up to 100 people were killed, about 500 more were injured. Western countries accused government forces of Syrian President Bashar Assad of using chemical weapons against civilians.

In response to the chemical attack, the United States conducted a cruise missile attack on Syria. However, the Russian Defence Ministry said that it was Syrian Air Force that bombed terrorists' warehouses, where chemical weapons were produced for their subsequent delivery to Iraq.