Russia: US commits act of aggression against UN member

The United States struck the positions of Syrian government troops on April 7. Pentagon officials said that the missile strike was a single-handed action of the United States. 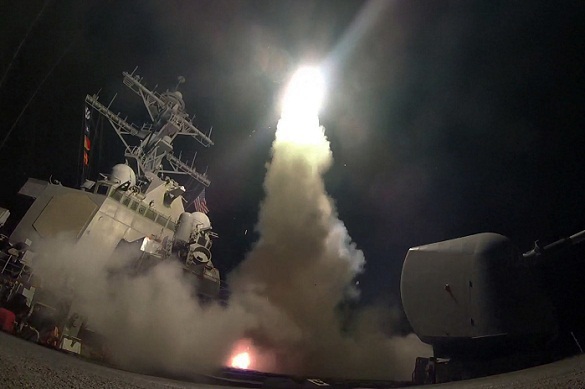 US warships launched 50 Tomahawk missiles from the Mediterranean Sea. One of the targets was the airbase, from which, as US officials believe, Syrian aircraft took off to strike Idlib, US National Security Adviser Herbert McMaster said.

US President Donald Trump said that he did not doubt the use of prohibited chemical weapons by Syrian authorities in violation of UN resolutions.

A statement issued Thursday by the legal adviser of the White House, the US president did not require Congress permission to launch a missile strike against the Syrian airbase. At the same time, congressmen were divided about Trump's decision to strike Syria.

The state television of Syria called the rocket attack of the US armed forces on the government base an act of aggression, Reuters reports. Governor of Homs Province Talal Barazi said that the US missile strike served the purposes of "armed terrorist groups" and the Islamic State terrorist organisation (banned in Russia).

The airbase that the US targeted was used by the Syrian army for struggling against ISIS terrorists.

US Secretary of State Rex Tillerson said that there were no contacts held with the Russian leadership before the attack on the Syrian airfield. Yet, Tillerson noted that agreements between the US military and the Russian Federation on the prevention of conflicts were observed.

The Russian Foreign Ministry intends to make an official statement in the near future in connection with the US missile attack on Syria.

Ozerov also said that the US missile attack may undermine efforts to combat terrorism in Syria. "I do not rule out that this will be a very bad example for the armed opposition in Syria. This may call into question the agreements reached with the opposition, including in Geneva," Ozerov said.

According to Konstantin Kosachev, chairman of the Federation Council for International Affairs, the missile attack conducted by the United States had only one goal - "to put a gunpowder stamp on the verdict of Assad's responsibility for the chemical attack in Idlib."