Should Russia forget about Lenin and finally bury him?

Russian settlements need to be "liberated" from monuments to Vladimir Lenin, while Lenin's Tomb in the heart of Moscow on Red Square should be closed, a message from the Synod of Bishops of the Russian Orthodox Church Outside Russia (ROCOR) said. 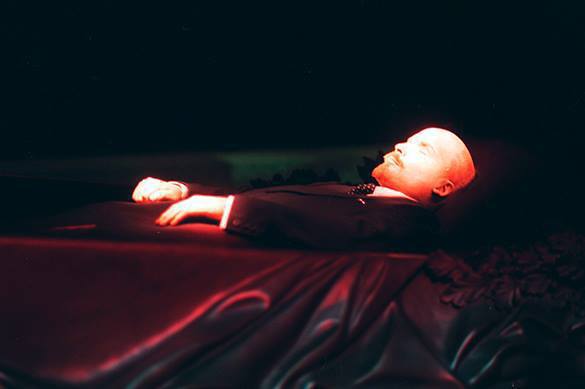 "The removal of the remains of the prime persecutor and tormentor of the 20th century and the destruction of monuments in his honour could be one of the symbols of reconciliation of the Russian people with God. These are all symbols of the tragedy and collapse of our God-given power. One should do the same with the names of Russian regions, streets and cities that to this day are still deprived of their historical names," the message distributed on March 12 said.

Representatives of the Synod of Bishops of the Russian Orthodox Church Outside Russia also  noted that it was only the revolution, organised and supported by Western countries, that stopped the rapid development of Russia. "In this connection, one should remember that today's relentless persecution of Russia by the Western civilisation existed both a hundred years ago and a lot earlier. The world always hated the Russian empire, the heiress to the holy Orthodox Russia. Neither Russia's loyalty to her allies, nor the ever-willingness of Russians czars to cooperate could help. Famous British politician Lord Palmerston once said: "It is heavy to live when no one is at war with Russia."

The message also notes that Russian educated classes, raised in the traditions of so-called Westernism, were ready to sacrifice themselves to push Russia into abyss and set the Russians against their faith, their czar and their motherland.

On Monday, March 13, State Duma deputy Ivan Sukharev (LDPR) sent a request to the head of the Federation Council Valentina Matvienko to consider the dismantling of Lenin's Mausoleum on Red Square in Moscow. "The Bolshevik revolution, in fact, was a crime against the state. Today, we live in a completely different country, but symbols and the dead are still in the center of Moscow. We must once and for all put an end to this case and reconcile the Reds and Whites by burying the Bolshevik leaders on Orthodox rituals, given that the church has voiced its position on the matter," the MP said, RT reports. Noteworthy, MP Sukharev became known for his proposal to postpone the celebration of Day of the Defender of the Fatherland from February 23.

In general, the attitude of the ROCOR to Lenin is understandable (in contrast to initiatives from MP Ivan Sukharev). Yet, a question arises: what shall Russia do about 70 years of its history? Not all people may like it, but even if they do not like it, they can not strike this period out from history. In other countries, though, people think that they can do it by demolishing monuments, not only to Lenin.

Archpriest Andrei Tkachev believes that sooner or later one will have to raise the question of Lenin's burial. However, the story is different when it comes to monuments. "You can only imagine how many cities and towns used to be inundated with busts and monuments in Soviet times," he told Pravda.Ru.

At the same time, the clergyman stressed, one should address the issue of burial of Lenin's body in a way not to trigger a civil conflict. "We have not finished the civil war - it continues in strange languid forms. We have the white and the red, we have anarchists and our own Entente. We can easily imagine who would join which forces in 1917, depending on people's political predilections that they have today," believes Andrei Tkachev.

President of the Information and Analytical Center "Religion and Society," Alexei Grishin, believes that raising the issue of the demolition of monuments is counterproductive under current conditions. "I believe that streets should be named by those who built them, just like metro stations, etc. We can not now rethink what our fathers, grandfathers and great-grandfathers did. Indeed, the number of monuments was startling, but now their number has been brought in certain correspondence to the norms of decency," the expert told Pravda.Ru.

"In my opinion, it is superficial to say "let's destroy all monuments." Then we give the ground to supporters of Lenin and the Communist Party to talk about the demolition of other monuments to czars and czarinas - Peter the Great, Catherine II and other people, who actually created the country in which we live today," Alexei Grishin said.