Admiral Kuznetsov: Ship of shame or ship of glory?

The aircraft carrier group of the Northern Fleet of the Russian Federation returns to its base in Severomorsk. The mission to Syrian shores lasted for nearly four months. 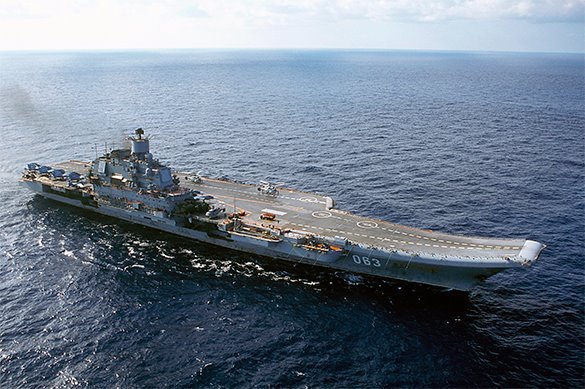 Russia's Defense Ministry did not leave the remarks from the British official unanswered. "The aim of such statements and of staging a show by escorting our ships, is to distract the British taxpayers from the real state in which the Royal Navy is," Russian Defense Minister Igor Konashenkov said.

"Second, we would recommend that Defense Secretary Michael Fallon should pay more attention to the British Navy, all the more because there is every indication to believe he should do so," Konashenkov concluded.

The commander of the Russian Northern Fleet, Nikolai Evmenov, has recently spoken about the results of the Russian naval mission to Syria. On February 3, airplanes and helicopters of the Admiral Kuznetsov aircraft carrier returned to their base in the Murmansk region.

"There were 420 sorties conducted, 117 of them - at night. These remarkable arms, equipment and professional skills of our pilots have helped destroy more than a thousand objects of international terrorism," said Evmenov.

It is worthy of note that the combat aviation of the Admiral Kuznetsov was used for the first time in military actions during the mission to Syria. The first flight was conducted on November 15, 2016.

Russia has lost two fighter jets in the mission - MiG-29 and Su-33. The accidents occurred during landing maneuvers, the pilots ejected.

First and foremost, the expert noted that it was the first time, when warships of the Russian Northern Fleet took part in combat missions in the Mediterranean Sea.

"The composition of the aircraft carrier group was based in accordance with the goals of the mission - to arrive and take part in military operations. The route, so to speak, was new and difficult to a certain extent. NATO surface ships and submarines were accompanying the Russian group all the time. One shall admit that they were making all appropriate warnings to our ships," Andrei Koshkin said.

"Everyone thought that the Russians would stop during the Spanish incident, but they could handle the situation perfectly," the expert added.

Speaking about the campaign, Andrei Koshkin also noted the level of security ensured for the group, both during the journey and near the coast of Syria. It goes about excellent interaction not only inside the aircraft carrier group, but also with the groups of the Russian Air Force in Hmeymim and Tartous.

"The prime combat mission of the deck aircraft - the liberation of Aleppo - has been fulfilled," the expert said, noting that the group returned to the place of permanent deployment successfully.

The whole world could see the possibilities of the Russian Navy, the expert added.

As for the problems, this is a natural process, he said. According to Andrei Koshkin, the problems that Russia has had to deal with during the mission have not affected the goal of the campaign. At the same time, the Russian administration should make adequate conclusions from all the mishaps that have happened.