S-300 in Syria: Russia will not wait for another stab in the back 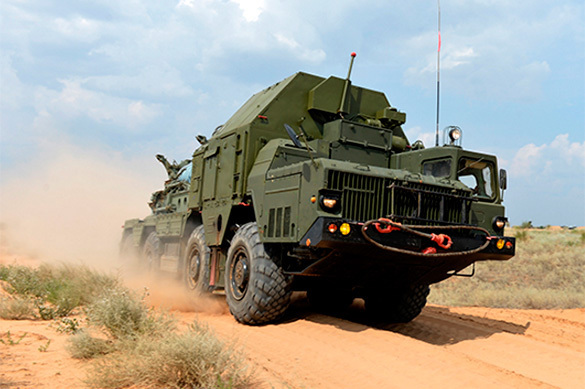 The US administration finds its difficult to explain the motive behind Moscow's latest move in Syria. US officials say that the S-300V4 system is potentially capable of intercepting any kind of US cruise missiles in the event of an attack in Syria.

The system was delivered to the Russian naval base in the Syrian Tartous during the weekend, US officials said. It was also reported that it was the first time when Russia deployed the S-300V4 system outside its territory.

As long as terrorist groups operating in Syria do not have either cruise missiles or military aircraft, the sources said that Russia takes measures to defend itself against a possible missile attack by the United States or its allies.

The S-300V4 Antey-2500 can destroy targets at a distance of up to 250 km. The system is designed to strike modern tactical and strategic aircraft, medium-range ballistic missiles, tactical missiles, aeroballistic and cruise missiles, radar surveillance and guidance aircraft and reconnaissance complexes.

Earlier, Russia had deployed an S-400 anti-aircraft missile system S-400 in Syria after the Russian Su-24 bomber was shot down by the Turkish Air Force in November 2015. With the advent of the S-400, the US immediately became more cautious in the coverage area of the Russian system.

On 3 October 2016, the US State Department officially announced the suspension of talks with Russia on achieving a ceasefire in Syria. Department spokesman John Kirby said that the US ran out of patience. At the same time, however, Washington will maintain military contacts with Moscow in order to avoid incidents in the skies over Syria.

Against whom did Russia deploy the S-300V4 air defense system if it works against aircraft, ballistic and cruise missiles? What does Russia's latest move in Syria mean? Pravda.Ru asked these questions to expert at the Association of Military Political Scientists, Head of Department of Political Science and Sociology named after Plekhanov, Andrey Koshkin.

"It is up to military specialists to make decisions about the deployment of such complexes. They evaluate the level of security of troops at a particular theater of operations and assess the real geopolitical situation," Andrey Koshkin told Pravda. Ru.

Tensions around Syria are not only of military, but also of political nature. Therefore, to ensure the safety of our troops and military equipment, such decisions are made. To this end, additional forces and resources are deployed, the political scientist added.

"We say that we do not want the incident with the shutdown of the Russian Su-24 to repeat. Are the Americans our adversaries? For the time being, we do not say that the Americans are ready to come into a direct confrontation with Russia. They like to wage proxy wars. Yet, Russia has announced that it will not be waiting to be stabbed in the back again. Those who want to test the security of Russian troops in Syria, should not be doing it, because Russia's response that will follow in this case will never make those people try to do it again," Andrei Koshkin said in an interview with Pravda.Ru.