MH17 crash investigation: Russia reacts to another portion of drag

The Kremlin commented on the report from the international investigative group about the crash  of the Malaysian Boeing in the Donbas. According to official spokesman to Russian President Putin, Dmitry Peskov, the conclusions that the investigators made in the most recent report were not final and shall not be considered as the final truth about the tragedy. 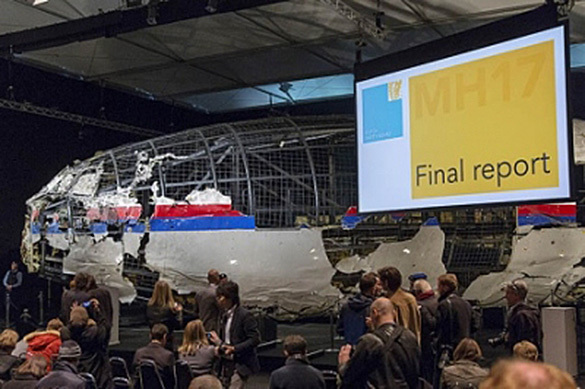 "There is nothing to accept or deny. These are preliminary conclusions," Peskov said on the BBC's HardTalk when asked whether Moscow could either accept or deny the statements according to which the Buk missile system that shot down the Boeing had been delivered to Ukraine from Russia.

The devil hides in the details that the West conceals

According to Dmitry Peskov, "one must be highly precise" on this issue. "This is a terrible tragedy, and we can not resort to unfounded allegations without any evidence or details provided. We know that the devil is in these details, and, unfortunately, we do not have many of those details to be able to say that everything happened that way and not another, that the weapon arrived from that direction and not another," Putin's press secretary said.

Peskov added that Moscow had previously excluded the possibility for the delivery of any hardware to Ukraine, not to mention the fact that Moscow has vehemently denied the presence of Russian troops in Ukraine. "And we continue excluding this possibility," he stressed out.

On September 28, the international investigative team (JIT) exposed its second report on the causes of the crash of the Boeing of Malaysia Airlines in Donbas on 17 July 2014. The main conclusion of the report is that the Buk missile system, from which the aircraft shot down, was delivered to Ukraine from Russia and was subsequently returned to the Russian territory after the aircraft was shot down. According to the report, the Buk missile was launched from the area of ​​the village of Pervomaisky that was controlled by the militia of the self-proclaimed People's Republic of Donetsk.

The maker of Buk missile systems, Russian concern Almaz-Antey, refuted the results of the international investigation. According to the company, there were three experiments conducted to model the circumstances of the tragedy. The results of the experiments confirmed that the missile was launched from the area of the village of Zaroshchenskoye, which was then controlled by the Ukrainian army.

Spokespeople for the Russian Defense Ministry, commenting on the report from the international investigation, said that no Russian anti-aircraft missile systems, including Buk complexes, had never crossed the border between Russia and Ukraine. Ministry spokesman Igor Konashenkov noted that the data provided by the international investigation team were based on two primary sources - the Internet and Ukrainian special services. "Therefore, the objectivity of this information and the conclusions based on it cannot but raise questions," the representative of the Russian Defense Ministry said.

Pravda.Ru requested an expert opinion about the conclusions of the most recent report about the crash of the Malaysian Boeing over Donbas from Director of the Center for Eurasian Studies, Vladimir Kornilov.

MH17 crash report raises questions, does not give answers

"This is an extensive report, and I have not been able to analyze it completely yet. Yet, it is already obvious that a significant part of the report is based on explicit rumors and gossip that have long been refuted, on messages from social networks and very doubtful organizations like Bellingcat. This is the first thing that catches the eye.

"In general, we have not seen anything new in this report, except for the appearance of strange audio recordings that also cause a lot of questions and doubts about, for example, the origin of those recordings and whose voices are taped on them. Most importantly, it is not clear why the recordings were exposed at all, if they do not confirm the official version.

"It is too early to say that the investigation has been completed. Holland had to publish this report against the backdrop of public pressure. Yet, the conclusions of the report raise questions  - they do not give answers to them. We still do not know who launched the missile - the report has left this question unanswered, and I do not think that the answer to this question will be found soon.

"For the time being, the reports that have been exposed so far (the most recent one, last year, from the Dutch Safety Board on the technical side of the tragedy - ed.) have established only one undisputed perpetrator - Ukraine. Ukraine had not closed its airspace either for military or civil aircraft, and no one has ever said a word against it."

Boeing 777 was shot down by Ukrainian MiG-29, expert says
Pravda.Ru