What can Russia expect from yesterday's talks between US Secretary of State John Kerry and Russian Foreign Minister Sergei Lavrov? What goals is Washington trying to pursue? Why did Kerry come to Moscow now? Pravda.Ru tried to find answers to these questions in an interview with scientist of politics Leonid Krutakov. 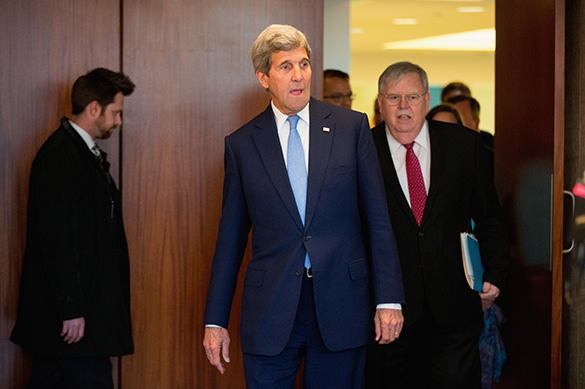 "The news about John Kerry's visit to Moscow was made public a week before in happened. The topics of the talks are obvious, but certain aspects of them create an intrigue."

"The agenda of the talks is extensive indeed. It includes such issues as Syria and Ukraine, issues of global world order and issues of US-Russian relations, of course."

"Do you think that the Ukrainian crisis will be frozen upon the mutual agreement of the parties?"

"One does not need to hold personal talks to freeze the conflict. The US would only need to show influence on Ukraine to do that. Yet, this is not happening, so there is something going on at this point - the parties are discussing something. This visit is not dedicated to something specific - it is a whole complex of problems that is important to deal with.

"As we can see, everything is intertwined - the crisis of the world order that was established after the Yalta conference. This crisis is so deep that it is impossible to distinguish certain manifestations of it. It is up to two superpowers - Russia and the United States - to solve basic questions of the crisis in the bipolar format. For the time being, there is no new format. There is a powerful player - China, but the USA makes political decisions with Russia. The EU has not materialized as a global player. In Europe, security and economic issues are handled in national format.

The crisis of the United Nations and the UN Security Council is also evident. The US blocks Russian initiatives, and Russia blocks US initiatives. The UN has turned into a forum for debate, it does not offer any solutions."

"What is the American view of the future of Syria?"

"The Americans have achieved about 70 percent of the goals that they wanted to achieve in Syria. They have destroyed the tandem of Russia and Turkey, undermined Turkey's cooperation with the Shanghai Cooperation Organization and BRICS, the Southern Stream project. Now they are on the offensive against the second leg of the Northern Stream. I think one of the basic goals of the United States was to prevent the development of energy cooperation between Russia and Europe. They wanted to use Ukraine's unpredictability to keep tensions in energy supplies. They have achieved that, and now they want to disrupt the Northern Stream-2 project, which is an easy nut to crack.

"Russia has achieved its goals in Syria as well. We have preserved the Syrian statehood. President Assad is still at power, although he was one foot in the grave. Russia has Syria's friendship, and Russia is not going to refuse from Syria's support.

"In Syria, the USA and Russia punched each other in the nose and stopped. The results that both Russia and the USA have achieved are not final. They have not created a positive agenda, but the parties have understood that negotiations are most important. The crises in Ukraine and Syria will be solved if solutions to the global agenda are found.

"The US finds energy and strength to punish European banks for their cooperation with Russia despite sanctions. The Americans also have energy to find suspicious deals between Blatter and Platini, but they have no energy to find and block financial channels of the Islamic State. As soon as the Islamic State is deprived of arms and money, many other questions will be solved automatically.

"The conflict in the Middle East produces excessive 800,000 barrels of oil daily. As long as these illegal oil channels are still working, it means that someone needs them to work. Any type of illegal oil cuts oil prices down. There are political forces and transnational companies that profit from this conflict.

"In light of the recent attack in Brussels, do you think that Russia and the United States may find a compromise regarding international cooperation against terrorism?"

"No one will refuse from this cooperation officially, but there is no such cooperation in reality, because there are no common interests between the parties. The Brussels attacks have struck a huge blow on the European Union. The EU has not materialized as a global financial center. The European Union is not a stable region, it is not safe there either. Europe either has to break up and start a new integration process, or fall into the arms of the United States to seek assistance in the field of security. Europe is being pushed toward the USA, but the European economy is very closely connected with Russia and China.

"I hope that the USA understands that it is impossible to destroy Russia with sanctions. I hope that the Americans understand the need to talk to Russia. They will not be able to create the pan-American world with only one center in Washington. They are doing their best to achieve that, but they fail, and we all can see that. Their efforts of the one and only global gendarme show that they do not have enough resources for that - political, military or economic ones.