The US Secretary of State has arrived to Moscow on a 2-day visit. Subjects of negotiations are known, but the accents carry on a certain intrigue. Political scientist Leonid Krutakov projected Pravda.Ru what Vladimir Putin and John Kerry would discuss. 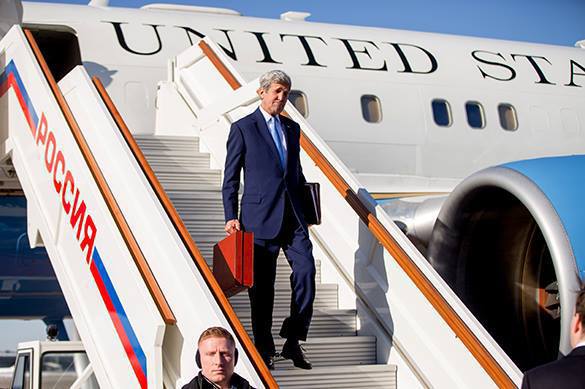 According to the expert, the agenda is certainly to include such issues as Syria, Ukraine and world order, kind of international threat of terrorism. "None of the aspects will be considered separately, but as a whole, as they are all connected socially, politically, and economically." The political scientist believes, that the crisis of system of government, which existed after the conference in Yalta is so deep, it is impossible to focus on its separate instances.

The EU has not become a global player and it turned out that key issues on the agenda are to be settled yet again in a bipolar format by two superpowers, that is Russia and the US.

What about Syria, the talks may be carried out only under global interests of the parties. To the moment both Russia and the US implemented their current tasks and appeared to be at a deadlock: they demonstrated their force and ambitions, bumped against each other and realized that it is necessary to negotiate.

Regarding the Islamic State and conflict in Syria, it should be noted that there are forces and transnational companies, that get real benefits in real dollars from this policy. Unless the parties agree upon this question, there will be no order, Leonid Krutakov is sure.

What about the terror acts in Brussels and international security, the talk will be quite formal, Krutakov believes and will touch inconsistency of the European special services given anti-terror training. In fact, the US and Russia have completely different interests in Europe, but it's difficult to say whether it will be talked about this time.

There is one more important moment, that should affect the course of negotiations. According to Krutakov, the US starts to realize that Russia can not be suppressed by sanctions. "There is no time to overimpose sanctions against Russia, suffocate it economically, wait until a social wave surges, bursts and pulls down the current political system. And it is not clear whether a new system will be formed, Leonid Krutakov said.

Meanwhile the US may burst itself, the banks and business will collapse, as there are certain prerequisites. "There is little time, the America apperceives that it will have to make some sacrifices for Russia, China, India, Brazil, and other developing countries. In other words, Kerry may start discussing some compromises and even concessions of the US during this 2-day visit.