The top Turkish administration and President Erdogan are personally involved in illegal production and transportation of Syrian and Iraqi oil to Turkey, Deputy Defense Minister of the Russian Federation, Anatoly Antonov said, Pravda.Ru reports with reference to TASS. 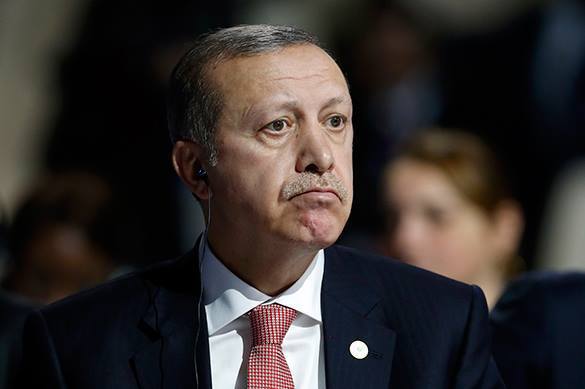 "Turkey is the main customer of this oil that is stolen from Syria and Iraq. According to our information, the top political administration of Turkey is involved in the criminal business, including President Erdogan and his family. We have repeatedly spoken about the danger of toying with terrorists," Antonov said.

Air strikes of the Russian Air Force have made it possible to halve the income of the Islamic State from illegal oil trade from 3 to 1.5 million dollars a day, the chief of the Central Directorate of the General Staff, Sergei Rudskoy said.

"This terrorist organization receives the income worth three million dollars a day. After Russia launched the antiterrorist operation in Syria, their income dropped to 1.5 million a day," the official added.

Noteworthy, the Islamic State makes about two billion dollars a year on illegal oil trade. Russia's antiterrorist operation in Syria has also made it possible to cut the illegal oil production in the country twice.

"In two months, as a result of attacks of the Russian aviation, 32 oil refineries, 11 oil factories, 23 oil stations and 1,080 oil tankers have been destroyed," Rudskoy added.

According to the official, Russia's Defense Ministry has found three basic routes of illegal oil deliveries. The Islamic State steals oil from Syria and Iraq and all of these oil transportation routes come to Turkey.

"We have detected three basic oil transportation routes to Turkey. The oil goes to Turkey from ISIS-controlled areas of Syria and Iraq," the official said.

The western route goes to Turkish ports on the coast of the Mediterranean Sea. The northern one goes to Batman refinery, and the eastern one reaches the base in the town of Cizre.

During the briefing, the officials showed satellite images depicting strings of oil tankers coming from ISIS-controlled territories to Turkey.

Antonov also drew attention to the fact that the son of the Turkish President heads one of the largest energy companies, whereas Erdogan's son-in-law serves as the Minister for Energy. "The cynicism of the Turkish leadership has no limits. This is a brilliant family business! Can this be possible anywhere else?" Antonov said.

"Look what they're doing. They got into a foreign country and are shamelessly plundering it,"  said the official.

Russia does not strive for the resignation of President Erdogan, because this is an internal affair of the Turkish people. "Our goal and the goal that we urge you for, ladies and gentlemen, is to block sources of terrorist funding in a joint effort," Antonov said.

"I am sure that there will be many discussions afterwards, and many will say that everything that you have just seen here is falsification. If all of this is a fake, let journalists go there and prove it," the official said.

Antonov pointed out that this is just a small part of information about the monstrous crimes of the Turkish elite. "We will continue to provide more evidence to show how Turkey is plundering its neighbors," he promised.

The head of the National Center for Control of Defense, Mikhail Mizintsev, said that the Defense Ministry of Russia would unveil more information next week about the volumes of arms sales and terrorist training on the territory of Turkey, TASS reports.

Meanwhile, Turkish President Tayyip Erdogan has rejected Russia's accusations of illegal oil trade. "Turkey has not lost its conscience to receive oil from a terrorist organization," Erdogan said in Qatar.