The Red Army is the strongest, greatest, invincible

Global Firepower website analyzed the power of armies of 126 countries on the basis of 50 criteria. The analysis did not include the nuclear factor, but it took account of economic conditions of the countries in question. The most powerful army in the world is the US army. The second place belongs to Russia, and the third strongest army in the world is the army of China. How true can the rating be? 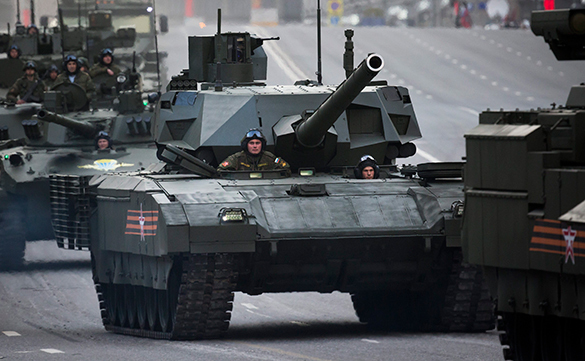 The researchers said that their analysis did not reflect the nuclear potential of the countries. The amount of weapons was not a decisive factor, wheres landlocked countries were not downgraded for the absence of national navies (sea powers were).

The research was based on the following factual sources: cia.gov, CIA World Factbook, wikipedia.com, accessible media and blogging data.

1. The Chinese army takes the lead on the number of servicemen - 2.333 million people. The United States follows with 1.4 million, and the Russian army comes third with 766.055 thousand troops. As for the personnel reserve, Russia comes first with 2.485 million people. China and the USA follow with 2.3 million and 1.1 million people respectively.

The US army is entirely based on contract soldiers - 100%. The level of material and technical equipment of the US army is very high.

Russia has just begun to modernize its military equipment. The morale of the Russian army makes our country the leader among the "competitors." In early 2014, a Su-34 simulated an attack on USS Vicksburg. There was no electronic impact shown on the vessel, but the Americans failed to activate the air defense system. Over 20 marines resigned as a result of the incident.

2. The Russian army comes first in terms of ground-based combat systems, particularly tanks. Russia has the total of 15,398 tanks. China follows with 9,150 tanks and the US - 8,848 armored vehicles.

Russia has a huge advantage in terms of combat armored vehicles (armored personnel carriers and infantry fighting vehicles), self-propelled guns, towed artillery complexes and multiple rocket launchers. Russia's potential theater of war is the near abroad, which explains the peculiarity.

New Russian tanks will confirm this advantage. At the turn of 2017-2018, Russia will launch mass supplies of state-of-the-art T-14 Armata tanks. The US has no new developments in the field: the Pentagon hopes to upgrade cold-war-era vehicles, such as M-1 Abrams and Bradley.

China has the third-generation tank - VT-4 (MBT-3000), which, as the Chinese say, outstrips Russia's Armata on key parameters. However, this is an export tank only.

3. US takes the lead on the strength of its Air Force, because the potential theater of war for the United States is located in Eurasia. The United States has 13,892 aircraft, including 2,207 fighter jets, 2,797 attack aircraft, 5,366 transport aircraft and 6,196 helicopters.

The commander of US Air Force in Europe, General Frank Gorenc, pointed out the ability of the Russian army to create very well-protected zones, such as in the Crimea and in the Kaliningrad enclave.

US experts hail Russia's Su-35 fighter saying that it is superior to the US F-35. Russia's long-range attack aviation is also a significant advantage of the Russian army.

4. As for the naval forces, China comes first with 673 warships, followed by the USA (473) and Russia (352 vessels). When they talk about the military predominance of the United states in the world, they mean the predominance of the US navy in the oceans. Twenty aircraft and helicopter carriers, 5,000 crews - this is an impressive number indeed.

The Chinese navy has made fantastic progress in two decades. China has built its navy from scratch, having made it second most powerful navy in the Pacific region after the US Navy.

The Americans have the inverse dynamics, which all American experts acknowledge. The US Navy has been reducing in number: the US navy has only 273 warships - this number is even less than it was during Reagan's presidency. Only 85 US ships are at sea at the moment. In case of a crisis, the Chinese will be able to crush the US navy easily.

This autumn, the United States will not send an aircraft carrier to the Persian Gulf because of budget cuts.

5. The US spends 577.1 billion dollars on military purposes every year. Russia - 60.4 billion, China - 145 billion. America mainly maintains what it has, paying no priority to new developments and re-equipment. The structure of military spending of Russia and China is absolutely different.

The US military budget is much bigger than that of Russia and three times as big as the military budget of China. However, the huge debt of the United states is not secured with anything. USA's foreign exchange reserves are four times as less as those of Russia. All this heralds the looming collapse of the US dollar that will most likely be replaced with the gold-secured Chinese yuan.

Russia will continue moving on the path of modernization. The country may lack the US and Chinese economic and financial power, but the priorities have been determined and the scientific potential is huge. The Russian army is underestimated, because the analysis does not take into account the rocket and missile power of the Russian army.