Russia, being not a G7 member anymore, concentrates on the blocs, where the West is not represented. The large-scale joint summit of BRICS, the Shanghai Cooperation Organization (SCO) and the Eurasian Economic Union (EEC) in the city of Ufa on July 8-10 will be a major geopolitical event to unite the forces that keep a distance from Washington's policy. Several major projects in the field of finance, economics and security are expected to be signed. 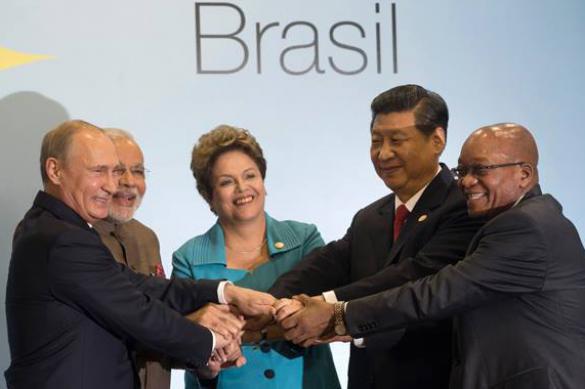 The summit of BRICS countries (Brazil, Russia, China, India, South Africa) raises a lot of interest among such countries as Iran, Turkey, Indonesia, Argentina. These regional leaders, despite ominous shouts from Washington, have not joined the sanctions against Russia. They are interested in becoming new customers of the new BRICS Development Bank with a capital worth $100 billion. Greek Minister for Foreign Affairs also takes part in the summit, even though Greece experiences a very deep crisis at the moment.

Many Western analysts believe that Greece may join BRICS in the near future.

The current summit is called "BRICS partnership - a powerful factor in global development." The title makes it clear that the bloc opposes the West in global development. BRICS is a unique forum that unites five completely different countries from four continents of the world without the participation of the United States or any other G7 member.

Russia is a chairing state in the two blocs in 2014-2015 year. The current summit in Ufa is a great opportunity for Russia to show its stability and leadership. For the first BRICS meeting, Russia invited all leaders of Shanghai Cooperation Organization (Russia, China, Kazakhstan, Kyrgyzstan, Tajikistan and Uzbekistan), including observers (India, Pakistan, Iran, Afghanistan), of the EEC (Russia, Belarus, Kazakhstan Armenia, Kyrgyzstan). Azerbaijan and Turkmenistan are also invited as the two countries evinced interest in SCO projects. Thus, 17 heads of states of the Eurasian continent will be present at the meeting.

BRICS summits require a lot of preparatory work and the current summit is not an exception. Meetings were held at the level of ministers of finance, foreign affairs, trade, health, environment, etc. The Business Council of BRICS, which includes five representatives from each country, will present its annual report on July 7-8.

The summit of the Shanghai Cooperation Organization is expected to welcome new members - India and Pakistan. This will be the first expansion of the bloc since 2001. The global role of the bloc will grow immeasurably after the two countries join the bloc, even though India and Pakistan still have tense relations. Within the scope of the SCO, China intends to promote its "New Silk Road" project that will connect Asia and Europe via Russia. The summit will discuss the issue of joining the Eurasian Economic Union.

Russia plans to shift the center of economic development to the Far East and Asia. Russia needs investment for the reconstruction of its own facilities. For the time being, the New Silk Road project does not stipulate such conditions. Nevertheless, Russia is interested in logistics centers and road construction.

"SCO and BRICS are to become large platforms to create a new political and economic reality, - Alexei Maslov, the head of the School of Oriental Studies, Professor, Doctor of Historical Sciences told Pravda.Ru. - The SCO is an organization that already exists. BRICS is more of a platform, rather than an organization. To a certain extent, it largely duplicates APEC that also works to solve presumably economic problems. The SCO should become a strong economic structure, whereas BRICS will most likely be developing on the basis of its major project - the new BRICS bank," the expert said.