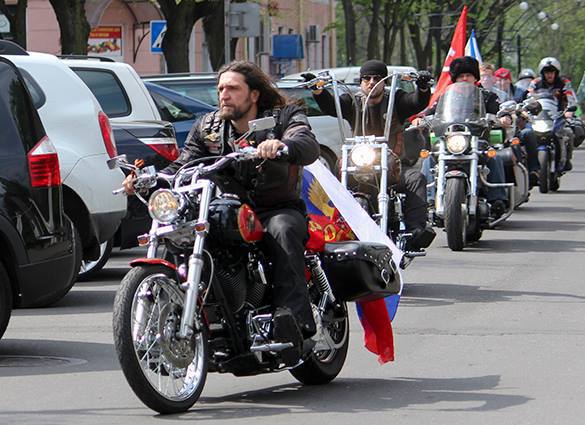 Members of the Russian motorcycle club The Night Wolves rammed into the world of big politics at high speed. They have already proved that there is no democracy in the "tolerant EU." The Russian bikers ought to end their tour of Europe to retrace the route of the Soviet army to Berlin on Harley Davidson motorbikes. Yet, the Russian bikers are strongly determined to make their way to Germany at all costs. Don't they understand that they give the West another reason to strike a media blow on Russia and President Putin?

The participants of the memorable motocross "To Berlin!" in honor of the 70th anniversary of Victory over Nazism broke through European borders despite obstacles from local authorities. The Night Wolves were not allowed to cross the border in Poland and Lithuania. A part of them continued their tour via the territory of Hungary and Slovakia in an attempt to "take" Berlin, their leaders say in the media. The entire act is not as simple as it seems at first glance, especially from the point of view of European citizens.

What do Europeans think of Russia's Night Wolves?

The leader of Russian bikers Alexander Zaldostanov (Surgeon) is famous not only in Russia but also in the West for his support of the actions of the Russian leadership in Crimea. He is considered a friend of President Putin and fully shares his beliefs. Additionally, Surgeon is known in Russia as the "the fighter of the invisible front" and the leader of the "patriotic education of Russian youth."

In the West, the above-mentioned characteristics are transformed into the description of an "ideological enemy." In Russia, the act of the Russian bikers is presented as a move to pay tribute to historical memory, to emphasize the importance of the Great Victory and Russia's role in the liberation of Europe from fascism.

But Europe, unfortunately, shares quite different ideas about Russia. Europe recognizes Russia's role in the destruction of Nazism, but the word "liberators" is often used in quotation marks. We will not speculate why this happened, but one should be very cautious about such acts under the conditions of the information warfare.

The above-mentioned persistence of the Night Wolves can only worsen the attitude of European citizens to Russians. The Night Wolves, let's face it, are not a ballet troupe or a Russian folk ensemble. They are a fearsome group of big muscular men in leather outfits who carry black flags and an aggressive name. In the West, many view the act of the Night Wolves as an act of the "Soviet invasion" under the leadership of Supreme Commander Putin. Most likely, there are people in Russia who will say that they do not care what associations the Europeans may have about the bikers. Yet, the bikers are riding not in Russia.

Should Night Wolves be stopped?

For example, here is an example of such propaganda from Slovakia. "The Slovak Republic is a sovereign state that can defend its sovereignty at the right time," Slovak newspaper Pravda.sk quoted Ján Keselý, an activist with Slovak Democratic and Christian Union - Democratic Party (SDKU).

"We have no guarantees that during their stay in Slovakia the Russian gang will not be violating public order and the laws of Slovakia. Slovakia's international reputation is at stake. Therefore, should Russian nationalists enter our territory on American motorcycles, our security forces will meet them at one border and accompany them to the other one," said Keselý.

In Poland, people call to stage protest actions on the route of the Night Wolves. Why provoking the forces that try to send such calls to the general public?

We can not but mention the Germans, who are very self-critical as far as Nazims is concerned. Yet, the Germans, too, believe that the Night Wolves have gone too far in their zeal to celebrate the anniversary of Victory. Angela Merkel is coming to Moscow on May 10th, even though US officials do not want to go to Russia. Germany refused to let the Russian bikers cross the German border.

"If they were bikers from the United States, there would be no problem, I'm 100 percent sure," German reader Rupert Wille wrote in the comments section underneath an article in Frankfurter Allgemeine Zeitung. Still, he adds, "we do not want peace envoys in such a menacing form. Why not sending the Gergiev orchestra to us instead?"

It is wonderful when people feel proud of their country, but they should bear in mind the fact that people from other countries may have different feelings about that country.