Who put an end to World War Two and who defeated Hitler? These questions seem extremely strange, to say the least, to all Russians. Fascism was obviously defeated by the troops of the anti-Hitler coalition, in which the Red Army and the USSR played the most important role. 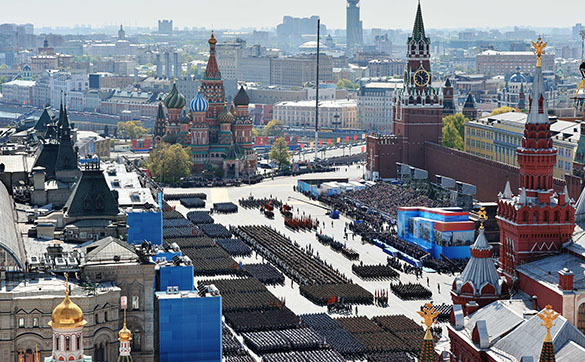 The USSR caused much bigger damage to Nazi troops. The losses, which the Soviet Union suffered in the war, were incomparable to those of Western allies. Nevertheless, the West seems to stick to another opinion. Western historians and ideologists make many people in the West believe that it is the USA and England that liberated the world from fascism. This point of view can be found in many text books, newspapers, magazines, research works and films.

Historical facts are often taken to absurdity. The Battle of El-Alamein, on the border between Libya and Egypt, which is evidently very far from the European scene of operations, was an event, in which tens of thousands of people fought on every side. However, western historians compare this battle to the Battle of Stalingrad, which was a clash between millions. The landing of allied troops in Normandy in 1994 is compared to all operations of the Red Army in the Eastern Front.

A US historian of the renowned Hoover Institution says that the Red Army would not have been able to defeat Nazi Germany if the US Air Force had not performed its heroic daytime raids on European objects in 1942-1943. The historian forgot to mention that the raids became possible only because most of the German fighter aviation was operating on the Eastern Front.

One may come to as many unfounded conclusions as possible, but facts remain facts. Facts and numbers say that it was the Soviet Union that played the decisive role in the destruction of Nazism. One shall remind that there were 607 Nazi divisions destroyed on the Soviet-German front, which was three-quarters of the whole fascist army.

More importantly, the USSR lost 27 million people in the war – 14 percent of the entire population, whereas England and the United States lost 400,000 and 300,000 people – 0.6 and 0.3 percent of the population respectively.

As for the Second Front, our allies did not act accordingly at this point. England and the USA were not willing to open it and preferred to wait for the USSR to destroy most of the German troops. They landed in Europe only in the summer of 1944, when the Soviet Union was close to celebrating victory in the war.

Western historians also claim that England was fighting against Nazism already in 1939, when Germany and the USSR were dividing Eastern Europe.

They also say that the USSR and then Russia underestimated the support from allies in the form of free shipments of arms and ammunition. Indeed, they supplied 15,000 aircraft (the Red Army had had only 9,000 planes by May of 1945) and over 7,000 tanks. However, Russian historians say that it did not play the decisive role in the defeat of Nazism.

The allied troops also supplied 427,000 vehicles to the Soviet Union, which made the Red Army highly mobile. Moreover, the legendary Katyusha missile systems were mounted on American Studebakers. There is no point in denying these facts. It goes without saying that the support from allied troops made the victory happen sooner and preserved many lives. However, it is obviously an exaggeration to say that the Red Army would not have been able to defeat Hitler.

Shortly before the 65th anniversary of Victory in the Great Patriotic War, the Western media excitedly indulged in making reports about “Soviet rapists, who raped 2 million German women.” Here are just a few of such headlines: “They raped every German female from eight to 80s” (The Guardian), “The Barbarians” (The Daily Mail), “Where the Russians were criminals” (The Times), etc.

The above-mentioned articles described the entrance of Soviet troops in Germany during the occupation. The “historians” do not refer to any documents, though. They also preferred not to mention the fact that the Soviet command ordered to execute those guilty of raping German women.

They do not say anything about what was happening in Germany during the stay of allied troops there. For example, the stay of the French foreign legion in Stuttgart was marked with mass rapes of German women.

What is the point of historical lies?

“Some of those who write such things want to attract attention to themselves. However, many deliberately intend to slander the USSR and Soviet warriors for political reasons. They want to belittle the role of the USSR in the defeat of Nazism and even justify Nazism at some point,” Russian historian Alexander Dyukov said.

It is worthy of note that not every Western country is fond of defaming the USSR’s role in WWII. Such historians as Richard Overy (UK), Robert Conquest (UK), Anne Appelbaum (USA) and Norman Davis (UK) defend objective truth and reject the above-mentioned arguments. Norman Davis, for example, is certain that the allied troops would never have landed if Europe if the Soviet army had not destroyed 150 German divisions before.

Laurent Joffrin, the chief editor of Le Nouvel Observateur (France) said that the French, like other nations, owe the Russians a lot because the Russians were the prime winners of the war.

In general, many reporters and historians of victor countries still question Russia’s victory in the war. This is a very unthankful approach. Each and every member of the anti-Hitler coalition made its priceless contribution to the victory. Former US Secretary of State Cordell Hull (1933-1944) said once that the USSR’s heroic struggle against Nazi Germany saved the allies.