The Parliamentary Assembly of the Organization for Security and Cooperation in Europe made a completely insane decision on July 3. European deputies approved the Vilnius Declaration, which says that both Nazi Germany and the USSR were guilty of unleashing Second World War. 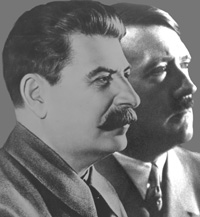 Two hundred and thirteen of 320 European parliamentarians have forgotten which country suffered most and contributed most to the destruction of Nazism in the world. In addition to unfounded accusations, the OSCE touched upon the subject of the horrors of Stalinism. The assembly did not think twice to equate Stalin’s regime with Nazism.

European countries suffered from the pressure of two powerful totalitarian regimes in the 20th century – Nazism and Stalinism, the resolution said. “The two regimes were based on genocide, violation of human rights and liberties, war crimes and crimes against humanity,” the document runs.

The authors of the document recommended the governments of European states to declare August 23rd the day of remembrance for all victims of Nazism and Stalinism. Lithuania and Estonia – the countries, which publicly allow marches of SS veterans and glorify Nazis as their national heroes – already celebrate this day.

Germany and the USSR signed the nonaggression treaty on August 23, 1939 , which entered history as the Molotov-Ribbentrop Pact. The document was dubbed as the “unification of separated Europe .”

Alexander Kozlovsky, the head of the Russian delegation at the OSCE, said that European parliamentarians were pushing Europe to another separation. Kozlovsky withdrew his candidacy from the vote to elect the administration of the parliamentary assembly.