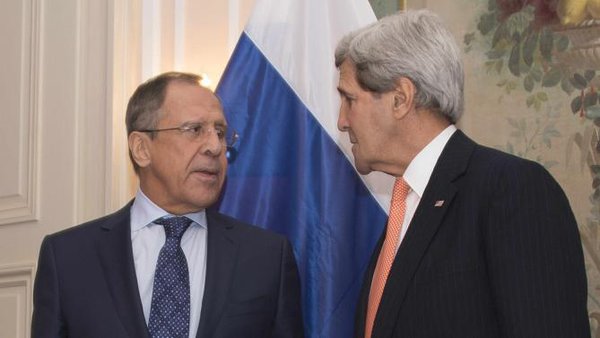 German Chancellor Angela Merkel was speaking before Sergei Lavrov. Thunderous applause interrupted her speech six times. The participants of the conference gave Merkel the loudest ovation, when she welcomed Ukrainian President Petro Poroshenko, who was sitting in the front row.

"In the case of Libya, Afghanistan, Iraq, Yemen and Sudan our partners actively asked governments to enter into dialogue with the opposition, even if they were extremists. However, during the Ukrainian crisis, they act differently, making up excuses and try to justify the use of cluster bombs," the Russian Foreign Minister said. "Our partners in the West have closed their eyes to everything that the Kiev government has said and done, which includes xenophobia. Some have advocated an ethnically clean Ukraine," Sergei Lavrov added. "Through every step, as the crisis has developed, our American colleagues and the EU under their influence have tried to escalate the situation," Lavrov maintained.

The US made it public it brokered the transit of power in Ukraine. But we know perfectly well what exactly happened, who discussed candidates for the future Ukrainian government on the phone, who was at Maidan, and what is going on (in Ukraine) right now," Lavrov said.

"If the main participants of the Minsk peace process, the Ukrainian authorities and the representatives of the Donetsk and Lugansk People's Republics, come to an understanding on every article of the Minsk agreements, I'm absolutely sure that Russia will be there to secure the guarantees of these agreements," he said.

"No matter where, in the OSCE or the UN Security Council, I'm certain that both Germany and France are also ready to provide such guarantees."

In conclusion, the Russian minister stressed out that the Ukrainian crisis "could not be resolved by military force." He set out a hope that the talks in Moscow with the participation of the leaders of Russia, France and Germany would bring results. "There are all opportunities to achieve results and agree on recommendations that will enable the parties to untie this conflict knot," Russian Foreign Minister Sergey Lavrov said.

Afterwards, the participants of the conference were given an opportunity to ask a few questions to the Russian minister. The chairman of the Committee on Foreign Relations of the European Parliament Elmar Brok took the floor and said that Russia violated key international standards having reunited with the Crimea. Sergei Lavrov said that in the Crimea, all happened in accordance with the Charter of the United Nations. "The UN Charter has several principles, and the right of nations to self-determination takes a kew place, whereas territorial integrity and sovereignty must be respected," said the minister. At this point, Elmar Brok and many other delegates from Western countries started laughing out loud, adding scathing comments to their derisive laughter.

Sergei Lavrov responded with restraint. Referring to Elmar Brok, Lavrov said that he found Brok's question funny as well. Afterwards, Lavrov paid attention to the issue of double standards in the West. "In Kosovo, there was no referendum" - the Russian Foreign Minister recalled. "Germany was also united without a referendum. We have been active supporters of that," Sergei Lavrov said. Responding to those remarks, Western delegates started whistling and shouting objections. It seemed that Sergei Lavrov was about to leave the podium, but he did not.

"We can discuss all of this if you truly want to know our position and our motivations," Lavrov said. "[Russian] President [Vladimir] Putin has said this repeatedly. You can laugh at it, of course. But then someone just gets some satisfaction from this. They say laughter prolongs life," the Russian Foreign Minister noted.

Meanwhile, it was reported that Russia was ready for constructive cooperation with the United States. Yet, Russia is not going to sacrifice its national interests for the United States, Russian Foreign Minister Sergei Lavrov said during a meeting with US Secretary of State John Kerry. The foreign ministers of the two countries held talks on the sidelines of the international security conference in Munich on 7 February. It was their first meeting in 2015.

During the conversation, Lavrov and Kerry discussed a wide range of issues in the US-Russian relations. The Russian minister said that hyping up confrontation with the purpose of putting the pressure of sanctions on Russia was hopeless. Washington's plans to supply military equipment and arms to Kiev are fraught with unpredictable consequences, Russian Foreign Minister Sergei Lavrov said. Such efforts may "disrupt the efforts to resolve the crisis in southeastern Ukraine."

Interestingly, John Kerry shared some personal news with his Russian counterpart at the meeting. Kerry mentioned that his daughter Vanessa just had her second child - a girl. Lavrov presented his congratulations and gave a dig to the former Massachusetts senator about the New England Patriots' Super Bowl victory over the Seattle Seahawks, the AP reports.

Kerry paused before replying, "I hadn't thought of it that way. I'm sure you do."