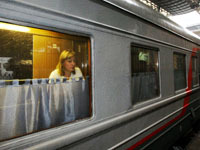 The program designed to facilitate voluntary resettlement of people from the former Soviet republics has apparently stalled. At the time when the program was active very few took advantage of the opportunity to move to their historical homeland. One of the main reasons is problems with obtaining citizenship which takes years.

What are the challenges that these people are facing? Those who went through the process complain about endless layers of bureaucracy, the Federal Migration Service (FMS) requiring increasingly more documents that are not always possible to obtain. Many have difficulty translating documents from one of the national languages ​​into Russian, as well as the fact that not all documents can be legally issued with ease.

Here is other evidence from the "martyrs:" "They refused to accept the documents from my mother, an old woman, whom I brought from Moldavia. She was born in Russia. She was denied documentation because in 2009 I had a small income, although 2009 has long passed."

"I live in Estonia, and, like my friends from Latvia, am not going to leave for Russia. Yes, we are second-class people here, we are forced to forget our native language and are called occupiers. But Russia is worse for us. We are nobody there. Our friends who have tried to settle down there came back, unable to bear the bureaucratic mayhem. This is why many prefer to leave for Europe, but not their historic homeland."

"It's time to reform the FMS. I obtained my citizenship, but if it were not for my aunt-colonel, who wrote a mean letter to the FMS, I would not have gotten it. What about those who do not have such relatives?"

While we enjoy banal phrases about the historical homeland welcoming the compatriots and it being a good solution for improving the demographics, they often think about moving to other countries. "In order to obtain Russian citizenship, a person must lose at least one year of their life in search of necessary information, collecting bills, standing in lines. At the same time they still have to manage to make money somehow. There has to be a separate department for the compatriots in the FMS. So far we have to watch some southerners who are getting into the offices bypassing the lines before our own eyes, while the Slavs are freezing in these lines."

"Is this the attitude we Russians deserve? The motherland greets us with humiliation, rudeness, lack of professionalism of the FMS employees, senseless endless lines for each piece of paper. They show you in every way that you are nobody and a slave! Where we came from we heard:" Suitcase - Train Station - Russia! "And here we hear:" We did not invite you here! "My son was so excited about going to Russia, and after such a reception he is asking," Mom, could be go to America instead?"

"I, being a Russian, was placed in the same condition with immigrants from the Caucasus republics, Central Asia and even Afghans. We are all equalized by the Russian laws which require eight years to complete the procedure for obtaining citizenship."

Some say that for those willing to fork out some extra money, the back door opens and then all problems are solved. One gets the impression that such bestial conditions are created deliberately in order that a person has no choice but to pay a bribe.

The FMS employees often recognize the issue and say that they simply unable to cope with the influx of visitors, especially considering that a great deal of time is spent not on the paperwork, but rather counseling the visitors.

In the West, things are different. It is believed that Israel and Germany have the most advanced legislation in terms of the work with compatriots and their descendants. The latter convene their own around the world, starting with the former Soviet republics and ending with South Africa and Latin America.

As for Israel, to obtain Israeli citizenship one does not have to be a full-blooded Jew. The total number of immigrants is in the millions, many of whom moved here because of the Jewish faith. The country is actively supporting this program. In Russia, the rules are somewhat different. Experts on the issue commented on the situation an interview with Pravda.ru.

Alexandra Dokuchaeva, head of the diaspora department of the CIS Institute: "The situation is really depressing, and it is very, very difficult to obtain Russian citizenship. There are too many bureaucratic barriers. I know many cases when people have been waiting for citizenship for 10-15 years and all in vain. All attempts to simplify their lives fail. Zatulin and Pligin in the State Duma have repeatedly proposed amendments to the legislation that would simplify the procedure for obtaining citizenship for ethnic Russians, but they are still up in the air. Why? The conclusion suggests itself. Does Russia needs Russians with this approach? The authorities benefit from not getting Russians who will require some social security,pensions, etc. They need guest workers with no rights who are not asking for any rights and are willing to endure anything just to be able to work."

Konstantin Zatulin, a member of the Duma Committee on CIS Affairs and Relations with Compatriots, said: "I can tell you that the system is so complicated that it is extremely difficult to overcome not only for an ordinary person who came from afar, but also a State Duma deputy like myself. The fact is that since the Soviet Union, our political elite have been suffering from a certain flux in terms of the national issue and national relations. On the one hand, they have been taught that one should pay attention to the rights of small nations and peoples of the Caucasus, but they mistakenly believe that the major nation of Russia - the Russian people - do not have any special interests and objectives. The main contradiction of their policies is that national interests of the Russian people are ignored and sacrificed to the nation-wide ones.

Meanwhile, for the Russians the existence of Russia is a major achievement. It is no accident that now organizations that to some extent are in favor of creating a purely Russian state have become much stronger. Among them are those who are simply speculating on the subject, and those who are looking for a real way out.

Many do not like the situation in which "all are equal but some are more equal." The point is that often even access to the budget and, consequently, the allocation of funds, is not equal for everyone. Often we see that some national republics have a distinct advantage over other regions.

As for the problem of obtaining citizenship documents and going through the FMS process, here, on the one hand, we see an underestimation of the problem in general, and on the other hand - the corruption scheme visible to the naked eye. As a result often people from the Caucasus republics who are able to maneuver are able to resolve this issue much easier than ethnic Russians who try to abide by and as a result fall into a bureaucratic trap. In practice we see a line of Russians on front of the FMS, while others are bypassing it.

I am not saying that we need legislation to prescribe pre-emptive right to Russian citizenship for the Russians. But why can't we simplify this process for them? It just needs to be done.

While editing largely unsuccessful legislation on fellow compatriots, I managed to enforce certain amendments, but in the new law they simply do not work.

It is impossible in this regard not to mention such an obstacle as the "scissors" between the law on compatriots and the Citizenship Law, which virtually rule each other out.

Before the end of my term in the State Duma I will be sure to make amendments to simplify obtaining Russian citizenship by the Russians.

This, however, requires convincing the government commission. This has to be done in a very delicate fashion so as not to cause jealousy from the representatives of certain forces and not have them invent new obstacles. We would like it to be done by the government and the president, but so far there was no progress in this respect.

The obstacles introduced by the Russian Ministry of Foreign Affairs have to be mentioned in this regard as well. First of all, I mean the department dealing specifically with the compatriots, whose officials have no understanding of the issues directly affecting the work of the government commission. This department employs people who are absolutely deaf to the problems of their compatriots, who do not want major amendments that could make the life of the ethnic Russians easier, and reduce the issue to formalities.

For example, they created a number of coordinating councils for the Affairs of Compatriots. They basically give an open hint to everyone else - love Russia at a distance. So much so, that they were vehemently against my proposals to simplify the procedures for obtaining documents. It turns out, my suggestion would perhaps frustrate the work of our diplomatic missions abroad, that, according to them, will be overworked. They also suggested that if we start producing documents for foreign nationals, it can greatly complicate Russia's relations with other countries. However, these small, compared to Russia, countries such as Poland, Romania or Hungary are actively distributing their passports in the neighboring countries, while we are afraid of doing this for some reason. Particularly in this case it was not about passports, but certificates. I regard it simply as unwillingness of the Ministry of Foreign Affairs officials to work."