On July 1, Latvian nationalists are celebrating the 69th anniversary since the liberation of Latvia from the “Soviet occupation.” They will march in the center of the country’s capital Riga from the Museum of Occupation (formerly known as the Museum of Red Latvian Riflemen) to the Monument of Freedom. 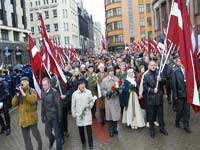 The festivities have been organized by nationalist-oriented politician Uldis Freimanis – a person known for his pro-Nazi actions in the Baltic nation. On March 16, he took part in the march of the veterans of the Latvian SS Legion and carried anti-Semitic placards.

Today, the politician will hold a public action to glorify Nazi “liberators” (Nazi troops occupied the Latvian capital on July 1).

Not all Latvian citizens intend to participate in the infamous event. Many of them think that the “Soviet occupation” was replaced with Hitler’s occupation on July 1, 1941. Many others harshly condemn the festivities.

The workers of Riga, presumably Latvians, as well as Russians, Jews and people of other nationalities, were defending Riga at the end of June, 1941. Young Latvian nationals – schoolchildren, students and cadets – also took part in the defense of their city. It was them who played the key role in the organization of retreat and evacuation from Riga, defending strategically important bridges across the Daugava River.

Nazi troops began the “liberation” of Riga with barbaric artillery attacks and bombings of the city’s residential quarters. Many architectural monuments were leveled during the attacks. Local nationalists seem to disregard that today.

Yuris Radzevich, a top official of Riga’s city administration, decided to ban the march. The official said that the event could be used to incite an international conflict and promote banned ideology.

Uldis Freimanis, the organizer of today’s event in Riga, personally visited Radzevich to convince the official of the need to hold the march. Radzevich said after the meeting that he was shocked with what he had heard in spite of the fact that he could not characterize himself either as a Russophobe or a communist.

“I heard racist, Nazi and anti-Semitic views,” the official said.

The city administration banned the march. However, Freimanis obtained permission anyway, from an administrative district court of Riga.

Glorifying Nazis as “fighters against communism” has become a tradition in Latvia. This matter is supposed to attract serious attention of the European Union administration that struggles against manifestations of Nazism in Germany and Austria. However, EU official seem to turn a blind eye on what is happening in the Baltic States.