The tangible results of the visit of Prime Minister Vladimir Putin to Latin America were, in a word, massive, the first concrete step in laying the cornerstone of a new geopolitical order based on multilateral values, a New World Order which spells a clear message to the USA: either you are with us, or against us. 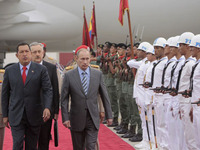 The much-heralded visit of Prime Minister Vladimir Putin to Venezuela this weekend was far more than a continuation of the excellent ties between the socially progressive Latin American growing giant of Hugo Chavez and the Russian Federation – Bolivia’s President Evo Morales was also present.

The scope of the bilateral agreements signed was massive and indicates that Moscow has huge potential in overtaking Washington as the main trading partner for this continent, where Russia is regarded with respect and the United States of America is considered by many as a pariah, in part due to its cruel and inhumane stance against Cuba and in part because of the history of its relations with its neighbours to the south.

The tremendous range of agreements signed primarily between Russia and Venezuela spells a clear message that Moscow is in this continent to stay: oil, defence, nuclear power, agriculture, education, fishing, infrastructure, transportation, healthcare.

As regards the petroleum industry, an agreement was signed last Friday which set up a joint stock company (PDVSA of Venezuela and a Russian consortium composed of Rosneft, Lukoil, TNK-BP, Gazprom and Surgutneftgaz) to operate the field Junin 6, while the option remains open to widen the bilateral cooperation to three other fields in the Orinoco strip. The original prediction is a production of 40,000 b/d. Under the same agreement, the Ayacucho-3 and Junin-3 fields will be developed.

The United States of America’s self-imposed blockade of Venezuela damages Washington and those states which agree to pander to Washington’s dictates, namely Brazil, whose President Lula told Hugo Chavez that the Supertucano contract with Embraer was off, due to pressure from the USA. As Vladimir Putin stated (causing Hugo Chavez to laugh) “It is good that the USA does not wish to sell”.

Russia has granted Venezuela a loan of 2.2 billion USD, part of which could be used to purchase 90 T-72 tanks, Smerch multiple rocket launchers, S-300 anti-aircraft systems and submarines.

Under the bilateral agreements, draft plans were drawn up to set up Venezuela’s first nuclear power plant.

Other areas of cooperation

Other areas, besides those mentioned above, include agriculture, education, fishing, infrastructure, transportation, healthcare and space exploration, with Russia offering to help Venezuela launch its own space program, including a launch site for satellites.

As we referred, the meeting in Venezuela was not only to discuss agreements between Russia and Venezuela, for Bolivia’s President Evo Morales was also present. His meeting with Vladimir Putin was concerned mainly with discussion of the joint venture agreement for exploration of oil and gas reserves (Bolivia has the second largest natural gas reserves in Latin America). Previous agreements covered the development of a gas pipeline across Bolivia.

Beyond the energy area, Russia has also conceded a loan of 100 million USD for Bolivia to purchase military helicopters.

Discussions were also help on trilateral agreement projects in the area of investment in Bolivia’s gas fields.