Russia firmly responds to any attacks against its sovereignty 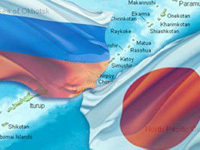 Many thought that the relations between Russia and Japan would improve considerably after the devastating earthquake and tsunami. However, the two countries continue to exchange calculated shots with each other regarding the Kuril Islands issue. Russia's Foreign Minister Sergei Lavrov showed a harsh response to new statements from a Japanese official about the islands.

Jaspan's Ambassador to Moscow Masaharu Kono said easier that the national tragedy in Japan would not exert any influence on the solution of the territorial dispute between Russia and Japan. On Tuesday, Moscow made a tough move in response. Russia's Foreign Minister Lavrov stated yet again that visiting the Kuril Islands was solely an internal matter of the Russian Federation.

"As for visiting the islands, it is our inalienable right and solely an internal affair. We won't discuss that with anyone," Lavrov stated in an interview with Japan's NHK. Moreover, Lavrov added, Russia would not be following anyone's recommendations as to what places of Russia the president of Russia can visit.

The current situation in Japan after the earthquake and tsunami is catastrophic. The number of victims and missing people has exceeded 7,000 and continues to grow. The government of the country has officially confirmed the death of 3,079 people. More than 2,000 suffered injuries as a result of the disaster.

Sergei Lavrov told Japanese reporters that Dmitry Medvedev inspected the implementation of decisions about the development of the socio-economic base of Kurile Islands during his visit there in November of 2010. Those decisions and goals, Lavrov said, were included in the federal program of the social and economic development of the Kurils before 2015.

Other members of the Russian government also visited the islands after Medvedev, Lavrov said. Among others, Lavrov mentioned Defense Minister Anatoly Serdyukov: the Kurils are Russia's border territory.

To crown it all, Sergei Lavrov said that he personally visited the islands several years ago too. "I saw that the the people of the Kurils were very interested in building friendship with Japanese neighbors," he said. "The people are interested in communication, they want to receive profit from mutually beneficial commercial activities and other forms of economic cooperation, as well as from the cultural communication. We still believe that there shouldn't be any restrictions for those traveling between Japan and all Kurile Islands," the minister stated.

Medvedev's visit to the Kurils added more fuel to the fire of the territorial dispute between the two countries. In the beginning of February, Japanese Prime Minister called Medvedev's visit to the islands "unacceptable rudeness." Moscow was extremely concerned about the "clearly non-diplomatic" remarks. The rhetoric will only exacerbate the relations, Kremlin officials said. Russian politicians and diplomats were also concerned about the desecration of the Russian flag by Japanese ultra right forces and demanded apologies.

Japan's Foreign Ministry at first decided to find an excuse for Kan's statements. Foreign Minister Seiji Maehara said that the prime minister had expressed his personal attitude to the problem. A bit later, though, prior to his visit to Moscow, Mr. Maehara accused Moscow of violating the international law in the question of the sovereignty of the islands. At the end of February, Japan refused to persecute its citizens for desecrating the Russian flag.

Moscow on its part started taking more economic and defense efforts on the Kurils. Medvedev ordered to re-equip the 18th artillery division on Southern Kurils. Afterwards, it was reported that Russia decided to send two French-made Mistral helicopter carriers to the islands. It also transpired that Russia would deploy the Bastion missile complex with supersonic anti-ship Yakhont cruise missiles.