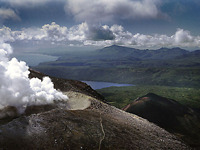 On February 7, Japan celebrated the Day of Northern Territories with a great splendor. The tone was set by Prime Minister Naoto Kan. At the national rally held under the slogan "For the return of the northern territories," he described the recent visit of Dmitry Medvedev to the Southern Kuriles as "inexcusable rudeness."

Japanese rightist arranged a rally near the Russian Embassy in Tokyo where they demanded the return of the South Kuriles and abused the Russian flag.

As we know, Tokyo claims the Etorofu, Kunashiri, Shikotan and Habomai islands. It is no accident that the Day of Northern Territories is celebrated on February 7. It was February 7, 1855 when Japan and Russia signed a bilateral Trade and Boundaries Treaty whereby the border between the islands runs between Urup and Iturup. As a result, Kunashiri, Shikotan and Habomai just south of Iturup were given to Japan. In the unsuccessful Crimean War against Russia when Britain, France, Turkey and the Kingdom of Sardinia fought Russia with a united front, the Tsar did not want to fight with the Japanese.

In turn, Russia's position is based on the fact that it owns the Southern Kuriles legally as a successor to the Soviet Union that had acquired the territory after the defeat of Hitler's Japanese allies in 1945. Until now, the parties have not signed an amicable treaty. Tokyo sees a clear connection with the return of the four South Kuril Islands.

Japanese media reported that Kan's statements regarding the Kuril Islands were extremely tough. We can assume that this is partly due to the increased attention of high ranking Russian officials to this region.

Yet, more serious steps are not expected. Despite the rigidity of the Kan's statements, they are no more than words. Under the conditions of the fierce political struggle in Japan, he simply has to make these statements; otherwise he would be accused of not defending Japanese interests properly.

As for the Japanese, currently a real aggravation of the relations with Russia would not be beneficial for them. They understand the benefits of the economic cooperation between the two countries. It is no accident that Kan, while demanding that Russia returns the islands, immediately rushed to adjust the impression of his speech, saying that Japan intends to conduct negotiations with Russia on economic cooperation.

In the meantime, the Japanese side intends to focus on a diplomatic solution. On February 10, Foreign Minister of Japan Seiji Maehara will be coming to Moscow for talks. He promised to devote his political career to the soonest return of ancestral territories.

Why do Japanese so stubbornly cling to a few islands, threatening Japanese-Russian relations in general by the territorial claims? What are Tokyo's hopes? Does it expect Russia to succumb to the political pressure and create a dangerous precedent of major territorial concessions? The bets in the "Kurile game" imposed on Russia by Japan are very high.

In addition, the transfer of the Southern Kuriles would be the starting point for future territorial claims on other Kuril Islands and Sakhalin. The notion of the "northern territories" in Japan is very vague. There are quite strong movements in the country advocating the return of all the territories lost in 1945 to the land of the rising sun.

In addition, in the event that the Southern Kuriles are given to Japan, others wishing to expand their borders at the expense of Russia will be noticeably more active. It is one thing if Russia voluntarily conducts demarcation of the borders, and a completely different one if it looks like surrendering to someone's arm-twisting.

Estonia is another country that has explicit territorial claims against Russia. In addition, Finland and Latvia have rather powerful nationalist movements that also require Russia to make some territorial concessions.

Earlier, under Yushchenko's government, Ukraine also dreamt of adding some territories at the expense of Russia. Chinese also have not forgotten about the lands in the Far East "unfairly" detached in the Tsarist times.

Given that Moscow understands the strategic importance of the Kuril Islands for Russia, it can be assumed that such ideas of the main Japanese diplomat will remain the naive dreams.

Therefore, under these circumstances the Japanese dream to push the right decision looks very insubstantial. In particular, this is obvious from the reaction of the Russian Foreign Ministry that has repeatedly answered the claims of Tokyo saying that visits of the highest representatives of the Russian authorities to the Southern Kuriles are strictly an internal affair of Russia.

Interestingly enough, in many ways the Japanese overreaction was due to the fact that Moscow only recently started thinking of its Far Eastern suburbs. In the 1990's, when Moscow had forgotten about the distant islands that were living their own unenviable lives, Tokyo intensely courted the residents of the Kuril, hoping that the archipelago, neglected by the center, will fall into the Japanese hands like an over-ripe apple.

Now the situation has moved forward. Although the problems of the Kuril Islands, including their Southern part, remain largely unchanged, there are some positive developments. For example, the Russian authorities intend to improve transport connection of the islands with the mainland through the construction of new airports and docs, as well as to strengthen the island's defense. Russia is currently heavily investing in the Kuril Islands, including the Southern part.

All this suggests that Russia does not intend to give up its territories to anyone interested. This is what causes the impotent fury of the Japanese politicians.