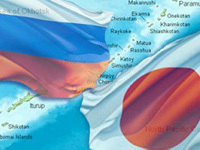 As it turns out, Mr. Kono did not cope with collecting the information about Dmitry Medvedev's travel routes in Russia. Medvedev visited the disputed South Kuril Islands, the territory of the Russian Federation, but the Japanese government had not been properly informed about the Russian president's visit to the disputed islands. Prior to that visit, officials of the Japanese administration said that such a visit was not likely to happen.

Dmitry Medvedev became the first Russian leader to have visited that part of Russia's Sakhalin region, which Tokyo considers to be Japan's northern territory. The visit sparked a harsh reaction in Japan. The national press and the parliament attacked Prime Minister Naoto Kan and Foreign Minister Seiji Maehara for their mistakes in foreign politics.

This is probably the only explanation to the inadequate reaction of the Japanese government to Medvedev's visit to South Kurils - the territory, which Japan traditionally considers its own.

Japan's Ambassador to Russia is expected to step down as a result of the above-mentioned events in January 2011. The new head of the Japanese diplomatic mission in Russia is supposed not to repeat such mistakes in the future. Who is the next super hero?

Chikahito Harada, 59, currently serves as Japan's Ambassador to the Czech Republic. He is said to be a professional specialist for Russia, who previously chaired the department for Russia and European countries at the Japanese embassy.

Will he manage to tackle the problems and how? Pravda.Ru asked expert opinion from Russian specialists for Japan, Alexander Kulanov and Viktor Pavlyatenko.

Alexander Kulanov: "Those events clearly showed that Japan has a poor perception of the Russian reality. I would say that Japan's perception of Russia is weird, to put it mildly. It is hard to understand the logic of such actions taken by the Japanese administration. They believe that unlike the previous ambassador, the new official, who knows the Russian language, will be able to handle all the problems. The problem is not about the knowledge of Russian at all. The government of Japan is not competent, as far as the given state of affairs is concerned - this is the problem.

"Such a reaction of the Japanese administration shows that one should not expect any positive changes in the Russian-Japanese relations in the nearest future. Now Japan wants to concentrate on collecting the information about the movement of Russian leaders. I think that it will be very hard to work with the new ambassador. What is he going to do? It does not seem to be likely that Kremlin officials would warn him of the travel plans of the Russian leaders.

"Even if they receive that information, Japan will only be able to stage heated, albeit shallow reactions: protests, objections, requirements, etc. As a matter of fact, Japan does not have any tools to stop Russian leaders from visiting the Kurils."

Viktor Pavlyatenko, the chairman of the Center for Japanese Research of the Institute of the Far East:
"The behavior of the Japanese administration looks like a childish game. It is simply impossible to logically explain their actions. The new head of the Japanese diplomacy in Russia will be collecting gossip about the plans of the Russian leaders. Although, I would like to say that Russia did not reject any requests from Japan before, if there were any.

"It just so happened that Naoto Kan's government lost its face after Medvedev's visit to South Kurils (which is considered a great shame in Oriental countries - ed.). Not only could the government hamper the visit, but they learned about it only after the Russian president was visiting the territory, which Japan considers its own.

"In addition, the Japanese government is ineffectively trying to retrieve its authority on the "Chinese front." It is Chinese officials, who decide when they are going to hold meetings with their Japanese counterparts and where. It is hard for Japan to do anything about it, because the country is strongly dependent on foreign trade. Anyway, Kan's government is in a very hard situation right now - his rating dropped below 20 percent.

"Naoto Kan will have to go through serious fights at the parliament, where the opponents of the current democratic cabinet will not miss their chance to cause as much damage as possible to the reputation of their political adversaries."